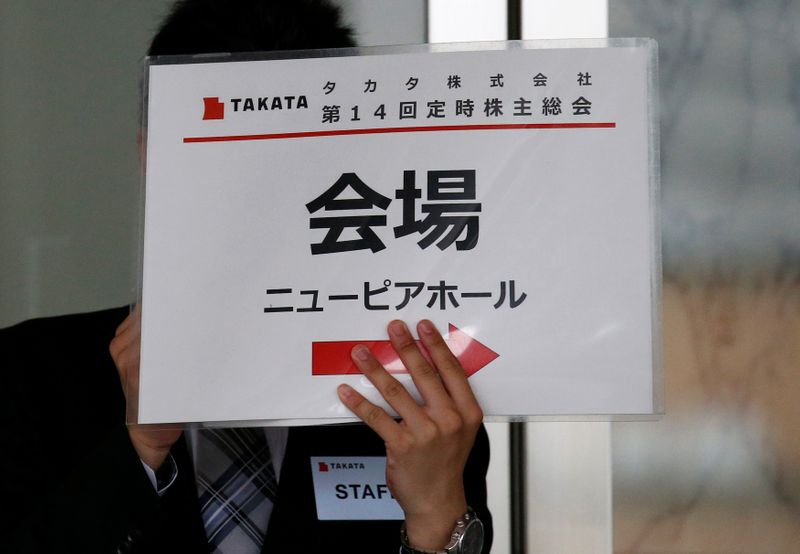 © Reuters. FILE PHOTO: A staff member of Japanese auto parts maker Takata Corp. holds a signboard of the company’s Annual General Meeting at an entrance of the venue in Tokyo, Japan, June 27, 2017, following the company’s filing for bankruptcy protection. REUTERS/

An investigation, which began in October 2020, showed test data on belt webbing, used for seatbelts and child safety seats, were doctored at plants in Hikone, Japan and the Philippines, Hisayoshi Iwamitsu, president of JSS Japan, told reporters.

The test results, which looked at quality of the webbing, were altered to meet legal and client standards.

The company is not planning a recall, he said, since reexamination of the webbing showed no safety issues, and also because the 12 automakers that the company is supplying decided not to implement measures such as car inspections.

As part of preventive measures, the company introduced an electronic system in March that would prevent data from being falsified, and is working on expanding human resources for quality management, he added.

Takata’s faulty airbag inflators caused the auto industry’s biggest safety recall and have been linked to numerous deaths and injuries, mainly in the United States.

The investigation also showed that data had been falsified at Hikone plant over a two-decade period until Jan. 2020, overlapping with when Takata was embroiled in airbag scandals.

“In response to the airbag issue, JSS group as a whole made various efforts including establishing a code of conduct and enhancing compliance awareness among employees, especially those involved in quality management,” JSS Japan’s senior legal official Kohei Hamamoto said.

“Unfortunately, investigators pointed out that wasn’t enough,” he added.