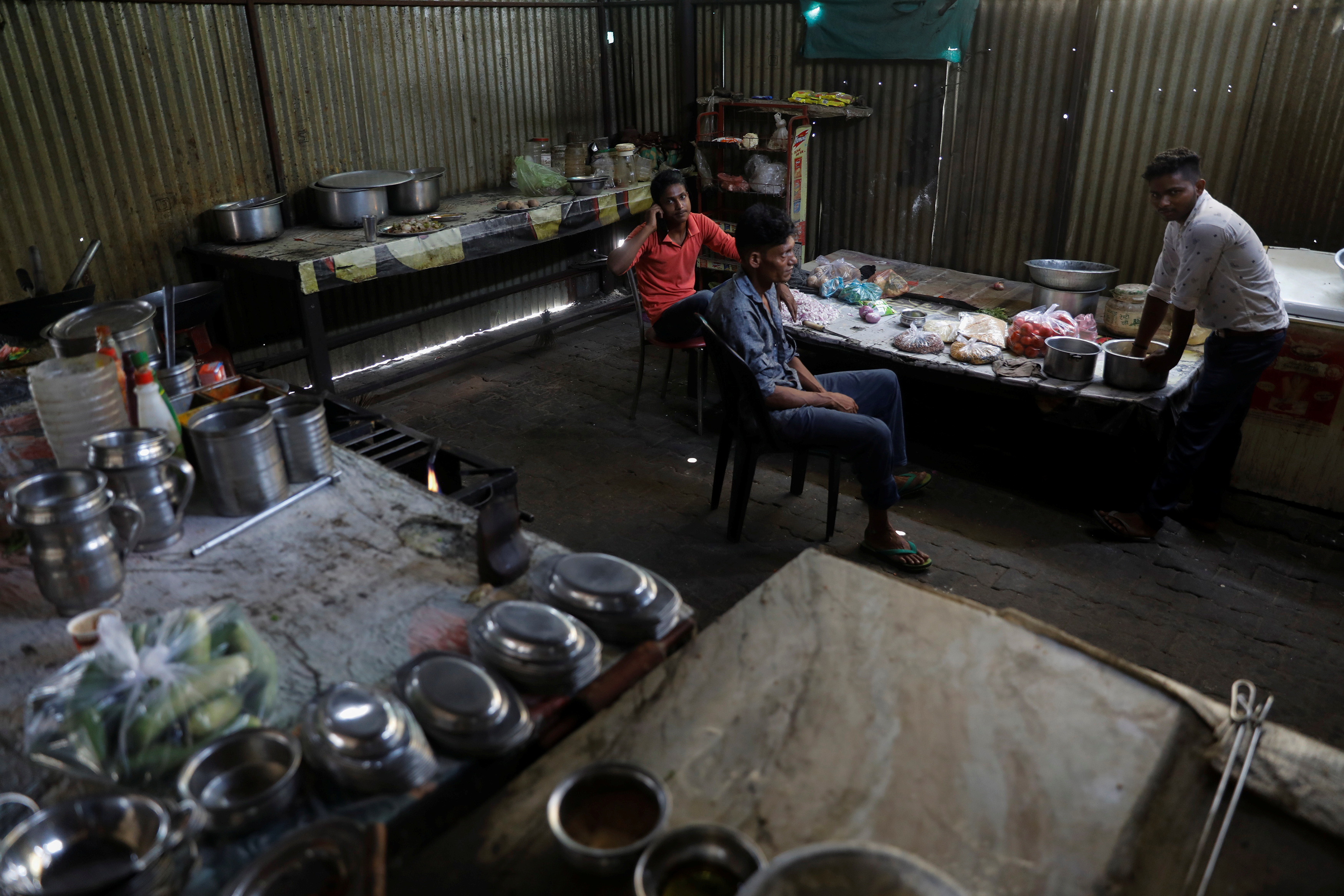 © Reuters. Workers are seen inside the kitchen of a dhaba, a small restaurant along a national highway in Gharaunda, in the northern state of Haryana, India, June 17, 2021. REUTERS/Adnan Abidi

By Manoj Kumar and Sunil Kataria

KARNAL, India (Reuters) – Asin Sharma lies idle on a cot near his restaurant by a highway linking India’s capital New Delhi with the northern state of Punjab.

Few motorists stop at the line of five open-fronted roadside eateries on this stretch of highway. Those who do venture cautiously inside ask only for tea and water. The restaurant’s tandoor, a traditional clay oven used for making flatbreads, sits cold and unused.

“We are in a very bad situation and the restaurant is on the verge of dying,” said the 35-year-old. “We have no work and so many expenses to bear. Our condition is pathetic.”

The eateries, or “dhabas” are ubiquitous in India. Tens of thousands line national highways but many are now struggling to survive as customers stay at home despite several state governments relaxing coronavirus curbs on movement.

Many dhabas are family-run and employ millions, including local people and migrant workers. The problems they now face are part of a wider malaise in the travel and leisure industry, and the Indian economy in general.

India on Friday reported 62,480 new daily cases, down significantly from a peak of more than 400,000 on May 9 during its second wave of COVID-19 infections. Given low vaccination rates, experts are already warning of a third wave later this year.

Economists fear the sector faces weakness into next year, even if the government can vaccinate the majority of India’s near 1.4 billion people. Only 6% are fully vaccinated now.

Last year, the government extended federal guarantees on bank loans for small businesses including hotels and restaurants, as well as a moratorium on some bank loans through to the end of March. Some restaurant owners have already had notices from banks to repay these loans.

Finance ministry officials last month said the government could consider more measures for restaurants later this year. A spokesman declined to comment further on the plans.

Restaurant owners interviewed said many could be forced to shut their businesses permanently in the absence of further government support. Others said they were likely to delay bank loans, defer payments and sell properties if the third wave does hit. Most have cut salaries and laid off staff.

Sonu Sharma, manager of Mannat Haveli Restaurant, says in normal times the restaurant is so busy they have a staff of 300, but now there are only about 50 to 60 people at work.

These unemployed migrant workers have been forced to fall back on low-paying farm work. The huge job losses in the restaurant sector reflect a broader rise in India’s unemployment, which almost doubled to 11.9% in May from 6.5% in March, according to CMIE, a Mumbai-based think tank.

On the highway between New Delhi and India’s financial hub Mumbai, Hans Restaurant, which used to thrive on catering for weddings and birthday parties, has tried to survive by selling takeaway food, but there are not enough orders, said manager Kailash Chand Meghwal.

“We never thought we would see such a day,” he said. “Almost 80% of our staff have gone back to their villages.”

ECB to lift bank dividend restrictions after Sept By Reuters