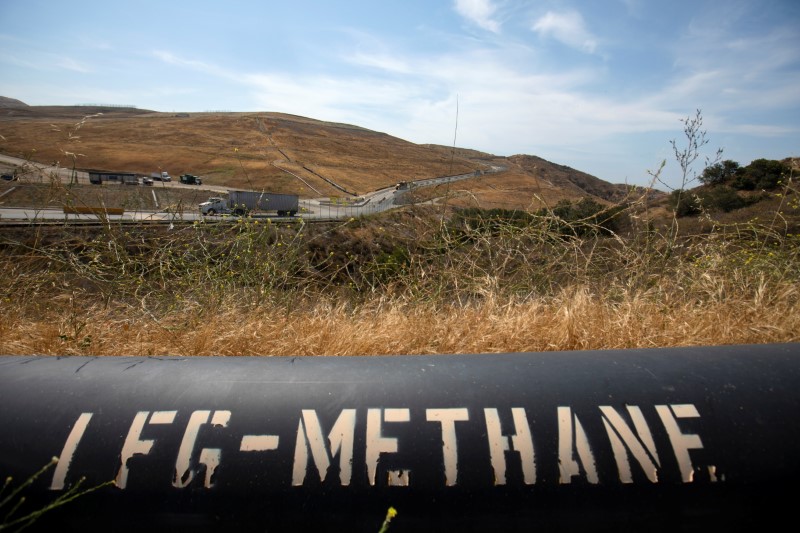 LOS ANGELES (Reuters) – The U.S. waste-management industry has become a darling of environmentally minded investors for its work in recycling trash and harvesting gases from landfills as an alternative fuel.

But the waste industry may be doing far more harm to the planet than investors think, according to a years-long aerial survey commissioned by California air-quality regulators. The survey found “super-emitter” landfills accounted for 43% the measured emissions of the potent greenhouse gas methane – outpacing the fossil-fuel and agricultural sectors.

NASA’s Jet Propulsion Laboratory (NYSE:) in Pasadena and leak-detection firm Scientific Aviation have been conducting the flyovers since 2016. They found that some trash dumps operated by top U.S. landfill companies including Republic Services and Waste Management have been leaking methane at rates as much as six times the facility-level estimates from the U.S. Environmental Protection Agency (EPA). (See graphic https://tmsnrt.rs/3vuZrAV on California’s “super-emitter” landfills).

The ten biggest methane-emitting landfills pumped out the gas at rates averaging 2.27 times the federal estimates, which are produced by waste firms using EPA methodology.

The California research may have wide-ranging global implications by showing the waste-management industry is playing a bigger role in accelerating climate change than regulators had believed. The surveys could also reveal flaws with United Nations guidelines for estimating methane emissions that are followed by the major governments including the United States, according to scientists involved in the surveys and regulators interviewed by Reuters.

The research could also bring scrutiny on the waste management industry from both policy-makers and green investors – who until now have been focused mainly on reducing greenhouse-gas emissions from fossil fuels, said Eliot Caroom, a researcher at TruValue Labs, which provides investors with environmental and social-governance data and analysis.

“One of the largest emitting industries, waste management, deserves more attention,” he said.

Gates – who earlier this year published a book titled, How to Avoid a Climate Disaster – owns more than a third of Republic Services. He owns about 8% of Waste Management through stakes held by the Bill & Melinda Gates Foundation Trust and his personal investment vehicle Cascade Investment LLC, according to fund disclosures. BlackRock owns a 4.6% share of Republic Services and 5% of Waste Management, mainly through funds that track third-party indexes.

Officials representing Gates and BlackRock did not comment for this story.

Inclusion in the Dow Jones sustainability indices is based on S&P Global (NYSE:) scores for a number of environmental, social and governance criteria. Waste Management has the highest environmental score in the broader commercial services sector and a near-perfect score for climate change strategy. Republic Services also earned high marks for climate strategy.

Officials for Republic Services and Waste Management said they were cooperating with the California flyover surveys.

Waste Management said it was expanding efforts to reduce methane leaks, including better monitoring, adding more soil to cover landfills and capturing the gas for reuse.

Republic Services said in a statement that the aerial survey data represents snapshot data that may not accurately capture routine emissions at its facility. It called itself a leader in responsible landfill management.

Methane concentrations in the atmosphere have been rising rapidly in recent years, alarming world governments seeking to cap global warming under the 2015 Paris Agreement on climate change. Measuring those concentrations in the atmosphere is relatively easy, but tracking the sources of the emissions is hard. That difficulty has become a major stumbling block for global policy-makers hoping to curb the problem.

The United Nations’ International Panel on Climate Change (IPCC) issued guidelines for governments in 2006 on how to estimate methane emissions from landfills without direct measurements such as aerial surveys. Instead, the U.N. has said, methane at landfills can be estimated using factors such as the amount and content of waste stored on site and assumed rates of waste decay. Such methods “really don’t do the job anymore,” said Jean Bogner, a University of Illinois researcher who has studied methane emissions in landfills since the 1970s.

The IPCC said it would revisit its guidelines if U.N. member nations asked it to do so.

The U.N. estimates that landfills and wastewater produce about a fifth of the world’s human-caused methane emissions, behind only agriculture and the oil-and-gas industry.

Landfills produce methane when organic materials like food and vegetation are buried within them, rotting in low-oxygen conditions. The gas can leak out if the soil covering the dump is too thin, for instance, or if pipes intended to capture methane are broken.

About one-fifth of trash in the United States is food, according to the EPA, a major driver of the problem. Methane emissions from landfills are less of a problem in many developing nations, which tend to waste less food and use open-air dumps rather than covering trash with soil, according to the IPCC.

On February 26, an airplane flown by Scientific Aviation buzzed about 1,500 feet above the Republic Services’ Forward landfill in Manteca in the Central Valley and snapped a series of pictures using an infrared spectrometer.

Scientists said the image showed the trash dump was emitting more than a quarter tonne of methane into the atmosphere each hour, the climate equivalent of nearly 12,000 cars idling on the nearby freeways. That rate is about six-times higher than the EPA had estimated for the facility.

Previous fly-overs of the facility since 2017 had shown similar readings.

The California Air Resources Board (CARB), which commissioned the survey, hopes the effort to find leaks will eventually help to curb emissions. A month after the February flyover, state inspectors accompanied officials from the San Joaquin Valley Unified Air Pollution Control District on a trip to examine the Forward landfill. The group discovered methane leaks that exceeded allowed limits in various locations, issuing two notices of violation to the landfill’s operator, according to an inspection report seen by Reuters.

In the most recent series of overflights which began last fall, regulators asked landfill operators to use information relayed to them in real-time from the aerial surveyors to find and fix leaks on the ground. The state is planning to issue a report on the effort later this year.

Many of the leaks are easily fixed by adding more soil or fixing broken pipes meant to capture methane for use as a fuel, said Jorn Herner, head of CARB’s research planning, administration and emissions mitigation.

The Biden administration last month announced it would require more U.S. landfills to install gas-capture systems to help limit methane emissions. A White House official did not comment for this story.

The state hopes to eventually replace the planes with space satellites. California in April announced a $100 million project, backed by billionaire Michael Bloomberg, to launch satellites in 2023 that will pinpoint large emissions of greenhouse gases from landfills and other sources, such as refineries, pipelines and farms.

Got a top MBA and started a company? Here’s the potential opportunity cost of that decision