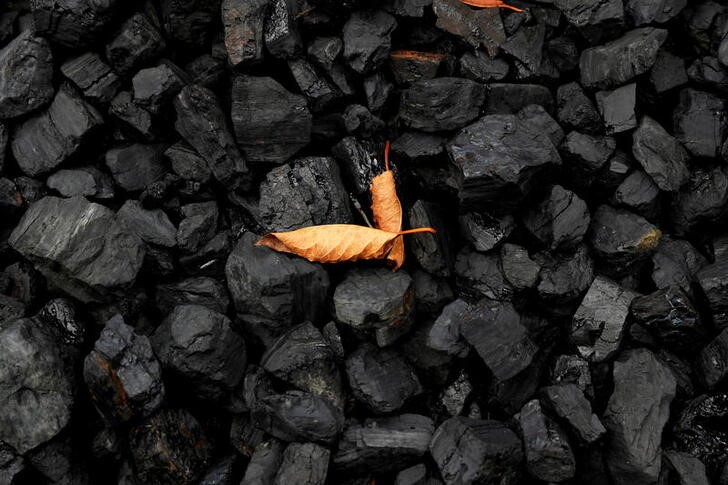 © Reuters. FILE PHOTO: A leaf sits on top of a pile of coal in Youngstown, Ohio, U.S., September 30, 2020. REUTERS/Shannon Stapleton

BOSTON (Reuters) – With their governor’s signature making it law, Maine legislators have become the first in the United States to order state officials to sell fossil fuel assets.

Other public pension systems, including New York City’s, have moved to divest shares in oil and gas companies on concerns about their role raising global temperatures. But the directive signed into law on Wednesday by Maine Governor Janet Mills, a Democrat, is the first to be passed by statewide legislation, backers said.

Compared with decisions by fund officials, the law’s passage marks “quite a bit more of a significant lift,” said Richard Brooks, climate finance director for Stand.earth, one of the advocacy groups that supported it.

Representatives for Mills did not return messages on Thursday and have not previously responded to questions about the divestment legislation. But a state website shows Mills signed it on June 16.

The $17.6 billion Maine Public Employees Retirement System has about $1.3 billion of fossil fuel exposure, its executive director, Sandy Matheson, said via e-mail. About two-thirds of the investments in oil and gas companies and utilities are through private funds.

She said the agency has not developed a plan for divestment, now required by 2026.

“One of the key provisions of the bill is that any actions must be in accordance with sound investment criteria and consistent with fiduciary obligations. Any plan that we do develop has to put the financial interests of our members first,” Matheson said.

Eloise Vitelli, a Democrat and the majority leader of the Maine Senate, which passed the bill earlier this month, said fossil fuel divestment had much support in her coastal district that includes the city of Bath and the town of Bowdoin.

“Fossil fuel industries are simply not as stable as they once were, so a move toward divestment makes both financial sense and supports our overall renewable energy goals,” she said in a statement sent by a spokesman on June 9.

Will Aerie Pharmaceuticals Hold its Support Level? By StockNews

Illusion or reality? Crypto demand either faltering or poised to charge By Cointelegraph

Who Wins the Stock Market Tug of War? By StockNews