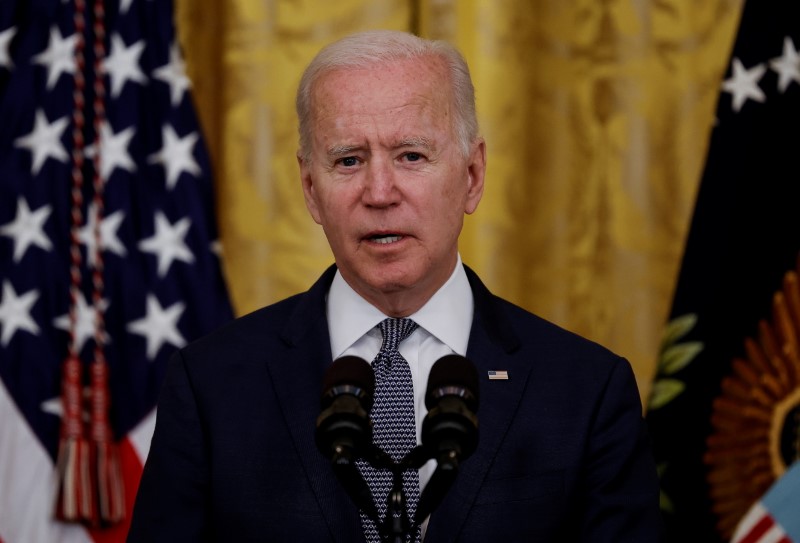 © Reuters. U.S. President Joe Biden speaks prior to signing of the Juneteenth National Independence Day Act into law in the East Room of the White House in Washington, U.S., June 17, 2021. REUTERS/Carlos Barria

Juneteenth, long a regional holiday in the U.S. South, was given national spotlight following protests in 2020 over police killings of George Floyd, Breonna Taylor, Rayshard Brooks and other African Americans.

Juneteenth, a portmanteau of June and 19th, is also known as Emancipation Day. It commemorates the day in 1865, after the Confederate states surrendered to end the Civil War, when a Union general arrived in Texas to inform a group of enslaved African Americans of their freedom under President Abraham Lincoln’s 1863 Emancipation Proclamation.

In 1980, Texas officially declared it a holiday. By 2020, it was recognized in 46 other states and the District of Columbia. Rules regarding holidays and days of observance vary from state to state, according to the National Juneteenth Observance Foundation, which campaigned for Juneteenth to reach federal holiday status for years.

Although in part a celebration, the day is also observed solemnly to honor those who suffered during slavery in the United States with the arrival of the first captive Africans over 400 years ago.

WHAT IS SIGNIFICANT THIS YEAR?

Juneteenth rose to wider national prominence in 2020 following the protests over racial injustice in the United States and elsewhere.

Biden, who was elected in November thanks in large part to support from Black Americans, has pledged to address racial inequality and gaps in wealth and education.

Critics say much remains to be done to address the legacy of slavery, however.

“It’s important to commemorate emancipation and to encourage everyday Americans to reckon with the history of slavery… but there is always a danger with these sort of things so they can be performative,” Matthew Delmont, a professor of history at Dartmouth College who specializes in African-American history and civil rights, told Reuters.

Designating Juneteenth a federal holiday would be a “failure” if it just acknowledges the date without spurring action on issues such as police brutality, voting rights, and the racial wealth gap, Delmont said.

Some state Republican lawmakers, following the unsubstantiated claims of voter fraud by former President Donald Trump, are campaigning to enact voting restrictions https://www.reuters.com/world/us/republicans-erect-voting-barriers-across-number-politically-crucial-us-states-2021-06-15, which civil rights groups say would impact the voting rights of Black Americans and other minorities.

Some Republicans are also pushing state bills that discourage teachers from focusing on the history of slavery and racism in the United States.

In some Democratic-led areas, campaigns to offer targeted reparations https://www.reuters.com/article/us-usa-race-reparations/chicago-suburbs-plan-to-pay-black-residents-reparations-could-be-a-national-model-idUSKBN2BD0B8 are gathering pace.

HOW ARE PEOPLE MARKING THE DAY?

People are marking the 156th anniversary of the holiday across the country with festive meals and gatherings as the coronavirus pandemic recedes in many states and cities relax their social distancing restrictions. Traditionally, celebrations have included parades and marches. However, this year many groups have opted again for virtual conferences or smaller events.

People are celebrating the holiday by organizing for civil rights, reading books about African American heritage and history, attending festivals and musical performances, and dining at Black-owned restaurants.

Federal employees will start taking the holiday off this year, observing it on Friday since Juneteenth falls on Saturday, the U.S. Office of Personnel Management said on Twitter.

Last year, some U.S. businesses committed to a change of policies, including recognition of the holiday.