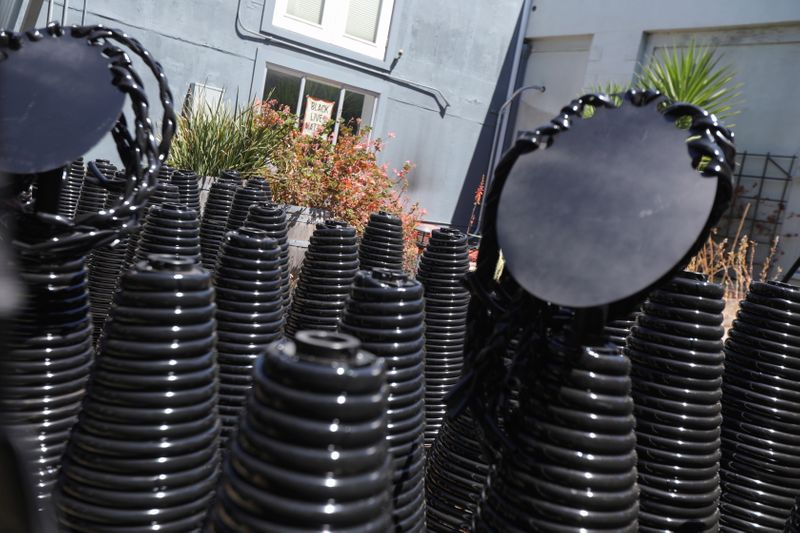 © Reuters. The “bodies” of ancestor statues for an upcoming exhibit by sculptor Dana King are seen in her courtyard while a “Black Lives Matter” sign is seen in the window in Oakland, California, U.S. June 10, 2021. REUTERS/Nathan Frandino

By Barbara Goldberg and Nathan Frandino

SAN FRANCISCO (Reuters) – One year after a statue of Francis Scott Key was toppled by racial injustice protesters in Golden Gate Park, an art exhibit opens next week with 350 slave sculptures gathered around the space once dedicated to the “The Star-Spangled Banner (NASDAQ:)” creator – a slaveholder himself.

To be unveiled on the June 19 holiday marking emancipation from slavery in America, the exhibit titled “Monumental Reckoning” is on the spot where Key’s statue was dislodged on Juneteenth 2020. That took place just weeks after the murder of George Floyd, a Black man who died under a white police officer’s knee, sparking worldwide racial injustice protests.

Key was a slaveholding lawyer from a Maryland plantation family, and his 1814 poem, which was later set to music and became the U.S. national anthem in 1931, includes a defense of bondage written into its third stanza, historians say.

Gathered around the empty plinth are 350 black steel sculptures – each 4 feet (1.2 meters) high – that represent Africans kidnapped and forced onto a slave ship headed across the Atlantic from Angola in 1619. Those who survived the journey became the first of America’s 10 million African slaves.

“We are standing for justice in that space, for everyone who has been oppressed,” said California sculptor Dana King, who created the artwork. Her 350 steel “ancestors” are among public sculptures she has created from California to Connecticut to honor Black lives.

The project that launched in February has moved at “lightning speed,” with work on the sculptures starting in late April, King said. The project has support from several Black leaders, including San Francisco Mayor London Breed, and sponsors include the Museum of the African Diaspora.

King is helping design the most effective way to reveal the painful history represented by “Monumental Reckoning,” including the fact that the beloved U.S. national anthem was written by a slave owner who opposed the abolition of slavery. Under consideration are plaques and QR codes accessible on the mobile phones of the 24 million people who enjoy Golden Gate Park each year.

King said visitors will learn that, aside from being a slave owner, Key in his role as district attorney of Washington, D.C., successfully lobbied President Andrew Jackson to appoint his brother-in-law, Roger Taney, to the U.S. Supreme Court. Seated on the nation’s highest court, Taney famously wrote the Dred Scott decision which declared that Blacks were not and could never be citizens of the United States.

The exhibit also will spotlight the rarely sung third verse of “The Star-Spangled Banner,” although it is still being decided exactly how that information will be conveyed, King said.

Key wrote the poem after witnessing a British attack on a Maryland fort during the War of 1812, and in the third stanza he wrote about sending slaves to their graves. Some historians say that was meant to threaten African Americans who were promised freedom by the British if they fought on their side in the war between the United States and Great Britain.

King said “Monumental Reckoning” targets both “systems of oppression” and individuals who need to self-reflect on “what needs to be fixed on behalf of others,” including bigoted views.

“I hope it becomes a communal space where people come to speak and to listen to others – people who don’t look like them. So that we can have a dialogue that the entire country needs to be having,” King said. “Out in the open. Literally, out in the open.”