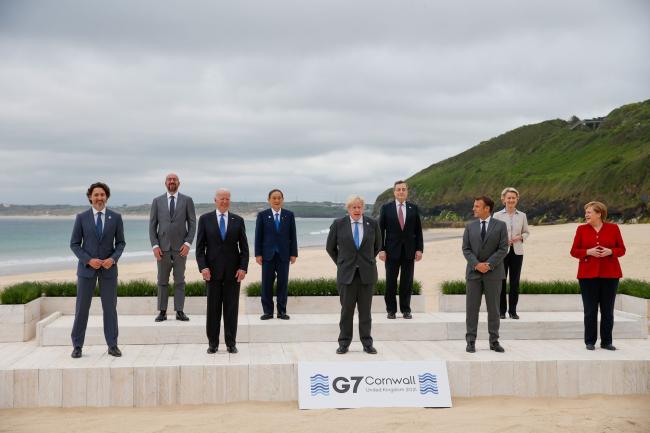 
(Bloomberg) — Group of Seven leaders braved drizzly beachside weather on the Cornish coast in southern England for a traditional “family” photo at the start of their annual summit, before the meeting formally got underway with a discussion on boosting the global economy after the pandemic.

This is the final G-7 for Angela Merkel after 16 years as German Chancellor (she is stepping down after an election in September), risking the prospect of next year’s gathering in Germany being a male-only affair. She was first to walk out for the photo, standing on the front right of the podium.

Standing in the back row were Japan’s Yoshihide Suga and Italy’s Mario Draghi, attending for the first time as leaders. Still, Suga has attended many a G-7 when he was a top aide to previous prime minister Shinzo Abe, while Draghi is a veteran of plenty of high-stake meetings from his time as president of the European Central Bank.

As the leaders moved off again, Macron walked close to Biden and put his arm around the U.S. leader, leaning in for a chat as they strolled along the sandy boardwalk.

Read our scrolling coverage of the G-7 summit here

Covid-19 is set to dominate at least some of the proceedings with G-7 members keen to rebuff criticism they are guilty of vaccine nationalism with a collective pledge to donate an extra one billion shots for the rest of the world. The U.S. is among those that have faced a backlash for hoarding shots at home even as poorer countries grapple with spiking virus cases.

Also on the agenda is climate change, while the U.S. and U.K. are eager to build a more assertive front in managing China as it grows in economic and strategic clout. And then there’s the question of Vladimir Putin’s recent mischief on Russia’s western flank involving Ukraine and Belarus, plus Russian links to ransom ware attacks on companies in the U.S.

With everyone in one place for the first time in two years, Biden might just seize on the opportunity to solicit advice from his colleagues on how to handle Putin ahead of his big summit on Wednesday with the Russian president.

Biden was asked by reporters what he would tell Putin. “I’ll tell you after I deliver it,” he responded.