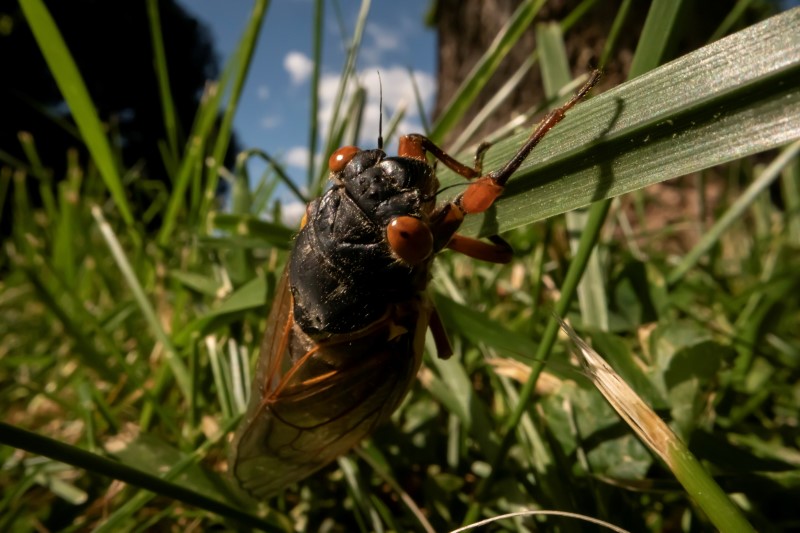 BOHEMIA, N.Y. (Reuters) – Dr. Elias Bonaros, a cardiologist and cicada expert, thought the noise-making insects – which emerge from the ground every 17 years – might not return to his neck of the woods, New York state’s Long Island, after very few showed up in 2004.

But this week they came back.

Bonaros, 48, has always loved the bugs.

“I was about 5 years old and my father one day caught a cicada in the summertime, put it in my hand, nature’s natural noisemaker,” he said in Connetquot River State Park Preserve on Long Island east of New York City. “It was really quite enhancing and entrancing, it was very fascinating to me.”

Bonaros missed the emergence on Long Island of the so-called Brood X (pronounced “Brood Ten”) in 1987, when he was 14, not looking for them until after they had already emerged, mated and died. “It was heartbreaking.”

He was disappointed again in 2004, when small numbers of cicadas were reported. “I went to Ronkonkoma,” he recalled. “I drove around here and … did not hear anything.”

He wondered whether enough cicadas had survived and reproduced to produce a brood this year.

As Bonaros walked around the preserve on Tuesday, he heard the distant mating call of Brood X cicadas, 1-1/2-inch-long (3.8-cm) black insects with iridescent wings and bright red eyes.

“Brood X appears to be very, very small” on Long Island, he said, but added, “I’m glad they’re not extinct. I’m glad a small population is hanging on.”

Billions of Brood X cicadas began emerging last month in 15 states, from Georgia to Washington, D.C., and west to Indiana and Illinois. But none emerged in New York state.

Entomologists were worried that the Brood X cicadas were extinct on Long Island due to development, or birds “which prey heavily on the cicada. There could be even possibilities of the spraying of pesticides,” Bonaros said.

“There’s a lot of fragmentation of the environment, a lot of development, which if you pour concrete over a surface, that pretty much kills the nymphs,” he said. “The cutting down of trees and development takes their food source away.”

Cicadas live above ground as adults for about three weeks – just long enough to reproduce before dying. They thrive in sunlit forest edges, which often provide the warmer weather and younger trees most ideal for them to lay their young.

Periodical cicadas burrow into the ground after hatching, some digging as deep as 8 feet (2.4 meters) below ground. While underground, the nymphs suck the sap from tree roots for nourishment. After 17 years, they emerge and climb trees and shrubs, where they shed their crunchy skins and harden into maturity.

The males make a cacophony of sounds in the treetops as they look to mate. Once the cicadas mate, the females cut slits into tree branches, where they deposit 400 to 600 eggs. The adults quickly die, but the eggs hatch a few weeks later to restart the cycle.

This year’s cicada class will bore into the ground and won’t emerge again until 2038.

“Hopefully they’ll be able to find mates, produce, and 17 years from now, you bet I’ll be here looking for them,” Bonaros said. “I will be in my 60s.”

Anything you can do: G7 rivals China with grand infrastructure plan