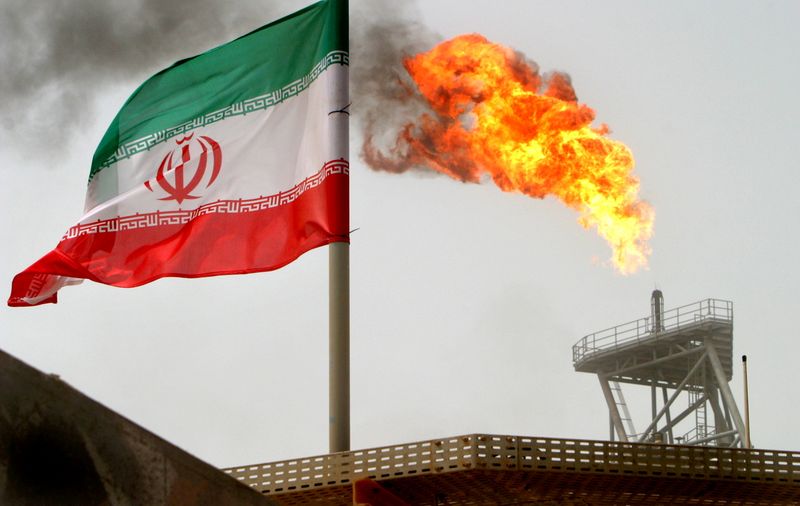 © Reuters. FILE PHOTO: A gas flare on an oil production platform is seen alongside an Iranian flag in the Gulf July 25, 2005. REUTERS/Raheb Homavandi/File Photo

NEW YORK (Reuters) – Iran regained its vote in the U.N. General Assembly on Friday after the United States enabled Tehran to use funds frozen in South Korea to pay some $16 million it owed to the world body.

Iran lost its vote in the 193-member General Assembly in January because it was more than two years in arrears. It owed a total of more than $65 million, but paid the minimum amount needed to regain its vote.

Iran says $20 billion of its oil revenue has been frozen in countries like South Korea, Iraq and China since 2018 under sanctions imposed by then-U.S. President Donald Trump.

“Illegal U.S. sanctions have not just deprived our people of medicine; they have also prevented Iran from paying our dues in arrears to the U.N.,” Iran’s U.N. Ambassador Majid Takht Ravanchi posted on Twitter. “After more than 6 months of working on it, the U.N. today announced it has received the funds.”

Iran was able to vote in the General Assembly on Friday to elect five new members of the U.N. Security Council.

Iran’s Foreign Ministry said that it had proposed to the United Nations that it could use funds frozen in South Korea to pay its dues. It said the world body followed up with the U.S. Treasury Department to get the appropriate approvals.

“The permit was recently issued and the process of withdrawing the membership fee from Iran’s account in the Korean banks and transferring it to the U.N. account in Seoul has been paved, and this payment will be made soon,” Iranian Foreign Ministry spokesman Saeed Khatibzadeh said last week.

When asked about the issue last week, the U.S. Treasury Department said it “does not comment on specific licenses.”

The U.N. payment comes as U.S. President Joe Biden’s administration and Iranian officials are expected to begin their sixth round of indirect talks in Vienna this weekend about how both sides might resume compliance with a 2015 nuclear deal.

Under the deal with key world powers, Iran limited its nuclear program to make it harder to obtain fissile material for atomic weapons in return for relief from U.S., European Union and U.N. sanctions.

However, Trump abandoned the deal in 2018, arguing it gave Tehran too much sanctions relief for too few nuclear restrictions, and reimposed sanctions that slashed Iran’s oil exports. Iran then retaliated about a year later by violating the limits on its nuclear program.