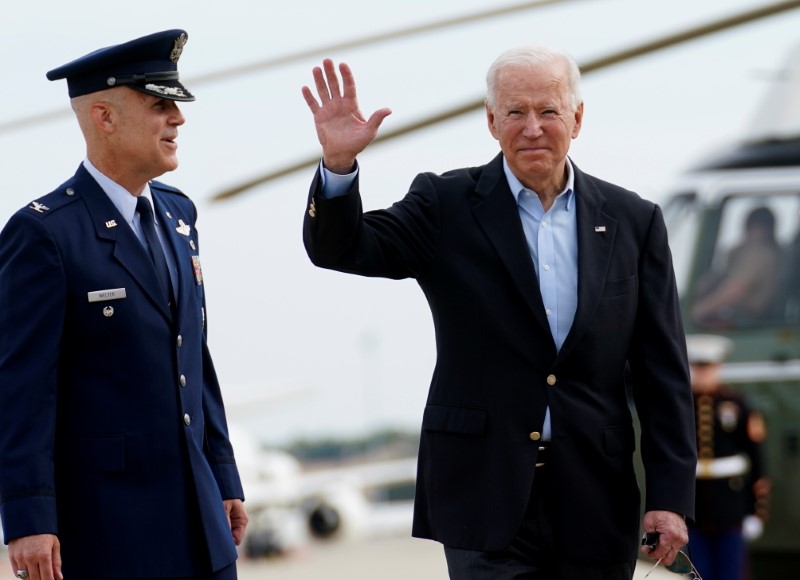 © Reuters. FILE PHOTO: U.S. President Joe Biden waves prior to boarding Air Force One for travel to attend the G-7 Summit in England, the first foreign trip of his presidency, as U.S. Colonel Tim Welter stands by at Joint Base Andrews, Maryland, U.S., June 9, 2021.


(Reuters) – The Biden administration on Friday began a process to reverse a Trump-era policy that opened vast swaths of the largest U.S. national forest, the Tongass in Alaska, to logging and mining.

The move is the latest effort to roll back a land use decision made under then-President Donald Trump, reflecting a growing emphasis on conservation over commercial development.

In a notice posted on a White House website, the administration said it would propose “to repeal or replace” the exemption of the Tongass from the 2001 Roadless Rule that was finalized late last year.

The Clinton-era rule banned logging, roads and mining in undeveloped forests. Alaska state officials had petitioned for the change because they said the rule has cost Alaskans jobs.

In a statement, a spokesperson for the U.S. Department of Agriculture, which oversees the Forest Service, said “the Trump administration’s decision on the Alaska roadless rule was controversial and did not align with the overwhelming majority of public opinion across the country and among Alaskans.”

Environmental groups cheered the decision and urged the administration to repeal the Trump policy entirely.

“A full reinstatement of roadless protections is a necessity and crucial to preserving America’s ‘Amazon (NASDAQ:)’ and one of our most valuable assets in the climate fight,” Andy Moderow, Alaska director of the Alaska Wilderness League, said in a statement.

Spokespeople for Alaska Governor Mike Dunleavy and the state’s congressional delegation did not immediately respond to requests for comment.