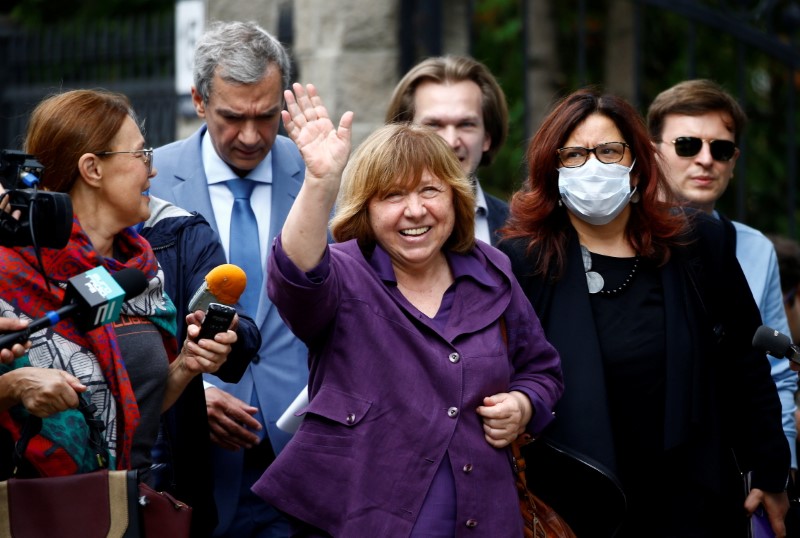 BERLIN (Reuters) – Svetlana Alexievich, who won the Nobel literature prize for her oral history of the end of the Soviet Union, is devoting her latest book to the “revolution with a woman’s face” in her native Belarus after a disputed election last year.

Alexievich, 73, became a Nobel laureate in 2015 for her account focusing on the Soviet quagmire in Afghanistan and the Chernobyl nuclear disaster.

Last year, she gained a front-row view of the mass protests that erupted in Belarus after President Alexander Lukashenko claimed a landslide victory in the 2020 presidential election.

When thousands took to the streets insisting that not he but Sviatlana Tsikhanouskaya had won the vote, Alexievich, seen as her country’s leading intellectual, joined the opposition leader’s council coordinating the wave of protests.

“Over those months we were able to do something we hadn’t managed for hundreds of years,” she told Reuters in Berlin where she has lived in exile since September, summarizing the theme of the book she is writing. “We became a nation.”

Alexievich joined a mass exodus of opponents of Lukashenko, many of whom were driven out by a crackdown that has landed thousands in prison and drawn condemnation from across Europe.

But, speaking ahead of the premiere at the Berlin Film Festival of Aliaksei Paluyan’s documentary film “Courage”, about the street protests, Alexievich said the demonstrators had done something unique and could count on one day triumphing.

“Our revolution has a woman’s face,” she said, speaking with pride at the way women, including Tsikhanouskaya, who took refuge in Lithuania, and her close ally Maria Kolesnikova, who is jailed in Belarus, had spearheaded the protests and been joined by thousands of women in the streets.

“If this was a revolution with a male face it would probably have been about a war and bloodshed,” Alexievich said, praising the way protesters had remained peaceful in the face of police brutality.

“And even if it’s not effective immediately, they are working away like moles, digging a tunnel to the future.

“Thousands of us want to return home,” she added. “But it’s not up to me: it’ll probably only be when Lukashenko is no longer in power.”

Belarus, long part of the Soviet Union and for centuries before that contested between Russia, Poland, Lithuania and Prussia, still has close ties to Moscow where President Vladimir Putin has propped up Lukashenko with financial aid while the West has sought to isolate his government with sanctions.

Harris visits U.S.-Mexico border amid criticism from Republicans By Reuters