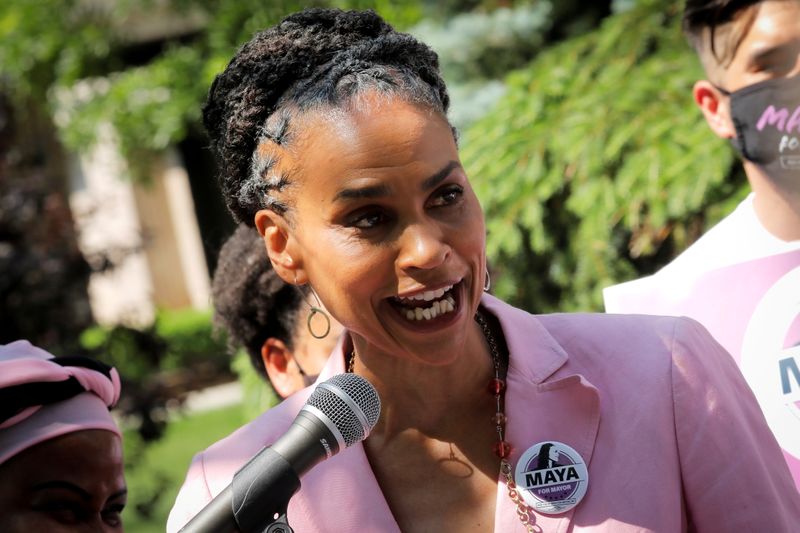 NEW YORK (Reuters) – For months, a trio of liberal Democratic candidates in New York City’s mayoral race has vied for the mantle of progressive standard-bearer in a crowded field.

In recent days, however, Maya Wiley, a civil rights lawyer and former MSNBC analyst, has scored endorsements from a constellation of prominent left-wing figures and organizations, including U.S. Representative Alexandria Ocasio-Cortez (often known by her initials, AOC), U.S. Senator Elizabeth Warren of Massachusetts and the Working Families Party.

Wiley’s growing momentum – she picked up the backing of the city’s public advocate, Jumaane Williams (NYSE:), on Wednesday – comes at a critical time in the race for the Democratic nomination, with early voting beginning on Saturday ahead of the June 22 primary.

The contest remains volatile, with as many as eight viable candidates at a time when the city is grappling with how to address problems laid bare by the coronavirus pandemic, including wide economic and racial disparities. The Democratic nominee will be the overwhelming favorite in November’s general election.

For the first time, the mayoral election will use ranked-choice voting, a system that allows voters to list up to five candidates in order of preference, injecting an additional layer of unpredictability.

All three are considered more moderate than Wiley on public safety, which polls show is voters’ top concern amid a spike in violent crime. The campaign has become something of a test case for the Democratic Party’s position on policing.

Wiley has proposed cutting $1 billion from the New York Police Department’s budget and redirecting the money to community-based alternatives to policing.

Adams, a former NYPD captain who has made public safety his signature issue, has hammered Wiley for her plan, vowing instead to increase police presence to address the rise in crime.

In response, Wiley, who would be the city’s first Black female mayor, has attacked Adams for supporting what she describes as failed policing strategies that disproportionately harm communities of color.

“There is fearmongering that tells us, rather than to solve our problems, we should fear the solutions,” she said at a campaign event on Wednesday. “It is those folks that we have to have the courage to stand up to and say: No. No. We can be smarter with our dollars; we can be moral with our budget.”

It remains to be seen whether Wiley’s brand of progressivism can capture a majority of voters. While New York is heavily Democratic, the city has a history of electing moderate mayors, including Rudy Giuliani, a Republican, and Michael Bloomberg, who won three terms as a Republican and an independent. Mayor Bill de Blasio, a liberal Democrat, has seen his approval ratings plunge during his second four-year term.

“New York is not a progressive city,” said Christina Greer, a political science professor at Fordham University. “We know there are a lot of Democratic voters who call themselves progressive and support progressive values but think AOC is a little too far left.”

Stringer, a career politician who remains within striking distance in polls, lost numerous endorsements after two women leveled decades-old allegations of sexual misconduct, which he has denied. Meanwhile, campaign workers for Morales went on strike over what they called a toxic environment; her top adviser quit and joined Wiley’s campaign last week.

“If we’re focused on getting into City Hall, we have to focus our attention on the candidate best positioned to win, and for us that’s Maya Wiley,” said Sochie Nnaemeka, the New York state director for the Working Families Party, which had initially endorsed all three liberals before dropping Stringer and Morales.

Wiley will get a boost from Local 1199 of the Service Employees International Union, the city’s biggest labor union, which announced a $1.2 million television advertisement campaign to support her this week.

“She’s clearly the progressive candidate that can win in this race,” said Gabby Seay, the political director for the union, which represents healthcare workers.