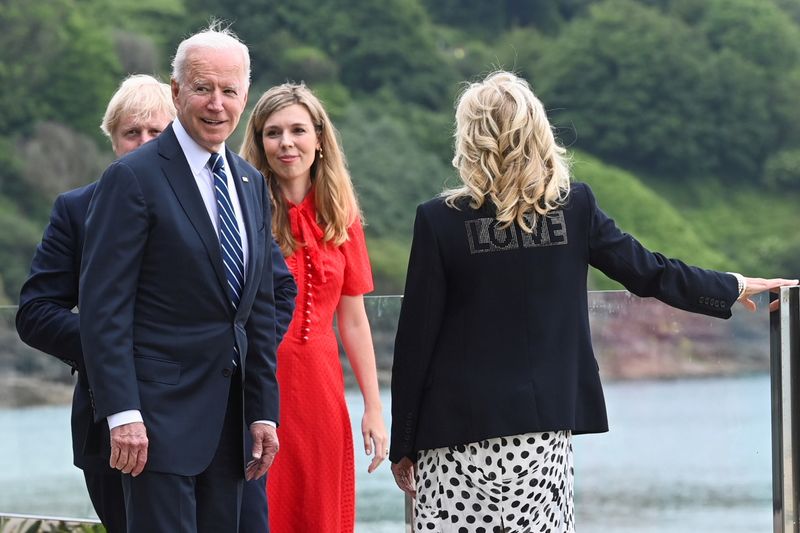 CARBIS BAY, England (Reuters) – On their first overseas trip since her husband Joe became president, U.S. First Lady Jill Biden had a simple message for the world emblazoned across the back of her jacket: “LOVE”.

“Well, I think that we’re bringing love from America,” said Biden of her black blazer with the word etched in large print on the back.

“This is a global conference and we are trying to bring unity across the globe and I think it’s needed right now, that people feel a sense of unity from all the countries, and feel a sense hope after this year of the pandemic.”

Joe Biden’s first foreign trip has taken him to Britain for a three-day summit of G7 leaders in Cornwall on England’s southwest tip. Ahead of that, the president met British Prime Minister Boris Johnson on Thursday for talks.

“I told the prime minister we have something in common: we both married above our station,” Biden told reporters after he and Jill met the British leader and his wife Carrie who he married just last month.

Johnson jokingly replied: “I’m not going to disagree with the president on that, or anything else.”

The G7 meeting runs from Friday to Sunday, after which the Bidens will meet Britain’s Queen Elizabeth for tea at Windsor Castle, before the U.S. president heads off for a NATO summit and a meeting with Russian President Vladimir Putin.

“I think he’s so well prepared. He’s been studying for weeks, working up to today,” Jill Biden told reporters of her husband’s preparations. “Joe loves foreign policy. This is his forte.”

Asked if he was ready for the meeting with Putin, she said: “Oh my gosh. He’s over-prepared.”

Jill Biden is not the first U.S. president’s wife to use a jacket to convey a message. Donald Trump’s wife Melania donned a coat with the words “I really don’t care, do u?” for a visit to a Texas shelter housing migrant children in 2018.