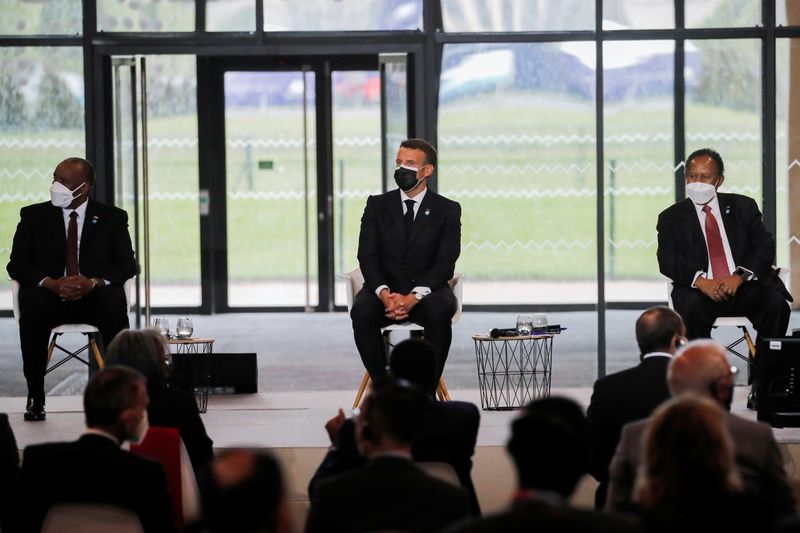 PARIS (Reuters) -IMF member countries have agreed to clear Sudan’s arrears to the institution, France’s president said on Monday (NASDAQ:), removing a final hurdle to the African nation getting wider relief on external debt of at least $50 billion.

Hosting a conference for Sudan in Paris, French President Emmanuel Macron also kick-started the broader debt relief effort, saying his country was in favour of fully cancelling the $5 billion it is owed by Khartoum.

Sudan is emerging from decades of economic sanctions and isolation under ousted former President Omar al-Bashir.

It had built up huge arrears on its debt, but has made rapid progress towards having much of it forgiven under the IMF and World Bank’s Highly Indebted Poor Countries (HIPC) scheme, which would reopen access to badly needed cheap international financing.

A transitional military-civilian power-sharing government is trying to pull the country out of a deep economic crisis with inflation at over 300% and shortages of basic goods fuelled by a lack of foreign currency reserves.

In order to reach the “decision point” that would unlock the HIPC process in June, Sudan recently cleared its arrears to the World Bank and the African Development Bank with bridge loans from Western states.

The remaining step was to clear Sudan’s arrears to the IMF, which France confirmed it would facilitate through a $1.5 billion bridge loan, and for that loan to be covered by member state pledges.

Those pledges were made during the Paris conference, paving the way for HIPC to proceed and boosting the prospects of broader economic reform in Sudan, Macron said.

Key recent reforms under an IMF monitoring programme, a requirement for HIPC, include lifting fuel subsidies and sharply devaluing the currency.

“The reduction of Sudan’s debt that we are going to soon initiate is a first result of these reforms, and this trajectory … should be consolidated, both economically and politically,” Macron said.

With arrears to multilateral lenders settled, Sudan can move forward to settling its estimated $38 billion debt to bilateral creditors. Of the country’s bilateral debt, about half is with Paris Club members. An additional $6 billion of its external debt is commercial debt, an unusually high proportion.

Sudan’s ministry of foreign affairs said in a tweet that Italy and Germany had committed to clearing their shares of Sudan’s debt, which total $1.8 billion, according to IMF estimates. Norway’s ambassador to Sudan said on Twitter her country would cancel its debt, listed at $100 million.

The HIPC process operates by consensus, whereby debt is restructured along similar terms for all creditors.

Kuwait, Sudan’s largest creditor by far at $9.8 billion, said in a statement it would support debt “resolution” discussions.

Saudi Arabia, another major creditor, has also said it will press strongly for a broad agreement on debt.

China has reduced and forgiven some debt and will push for the international community to do the same, said Hua Chunying, a foreign ministry spokeswoman.

The first part of the Paris conference was dedicated to promoting investment, with officials touting reforms in the banking sector and showcasing projects worth billions of dollars in energy, mining, infrastructure and agriculture.