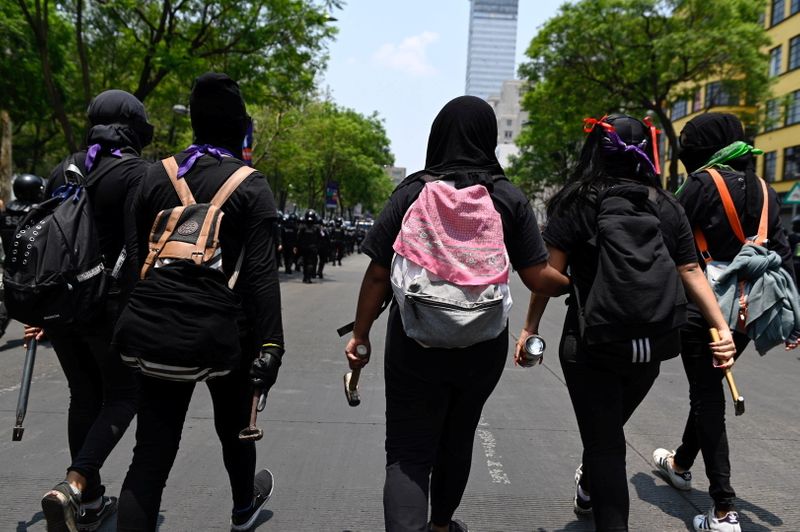 © Reuters. FILE PHOTO: Demonstrators take to the streets during a protest of feminist collectives against the police and the excess of public force used to disperse peaceful protests, in downtown Mexico City, Mexico, May 29, 2021. REUTERS/Mahe Elipe/File Photo

By Anthony Esposito and Abraham Gonzalez

MEXICO CITY (Reuters) – Mexico’s government, in an effort to protect the country’s nascent economic recovery and avoid the type of violent unrest seen in Colombia, has softened a planned tax reform, just as a recent electoral setback seems to confirm the need for caution.

Mexico’s finance ministry has for several months floated a shake up of the tax structure of the country with the lowest fiscal take in the Organisation for Economic Co-operation and Development (OECD) group of industrial nations.

A fiscal conservative, President Andres Manuel Lopez Obrador promised no new taxes or hikes for the first three years of his six-year term, with that deadline expiring in December.

The International Monetary Fund (IMF) last year urged Lopez Obrador to enact tax reform once the country recovered from the COVID-19 pandemic to boost the economy and support spending in the medium-term.

Some in the ruling party had proposed wealth and inheritance taxes. Now though, circumstances have changed.

“We’re coming out of the worst crisis of the last 90 years, not just in terms of the economy, but health,” Deputy Finance Minister Gabriel Yorio told Reuters in an interview on Tuesday.

He said it was “a very bad time to burden taxpayers and the economy, especially in this recovery phase,” with tax hikes.

Mexico’s economy contracted 8.5% in 2020 due to the pandemic, the most since the Great Depression of the 1930s, and hundreds of thousands of jobs were lost, though employment and activity are clawing back ground, lifted by U.S. demand.

Lopez Obrador will take heed of the “cautionary tale” in Colombia, said UBS economist Rafael de la Fuente, after a planned tax reform there sparked weeks of deadly protests and led to the resignation of the nation’s finance minister.

“The lesson learned from what happened in Colombia … Coming out of a pandemic it’s really difficult to promote these types of actions that will hurt the economy” and people, said Yorio.

He said Mexico’s government does not plan to implement increases in an upcoming fiscal reform, and will instead focus on closing loopholes, improving taxing efficiency and expanding the taxable base. He said the goal was to raise the tax-to-GDP ratio to 15% from a current level of just above 14%.

The loss of some political power after the results of Sunday’s midterm elections in which Lopez Obrador’s ruling National Regeneration Movement (MORENA) party and allies lost their two-thirds majority in the lower house of Congress could also prompt the president to negotiate more.

Some of the more ambitious ideas floated, such as an inheritance or wealth tax, could disappear because leading proponent, MORENA lawmaker Alfonso Ramirez Cuellar, lost at the ballot box in his re-election bid, said De la Garza.

And even though Lopez Obrador’s administration and allies have the majority needed to pass fiscal reforms, which only requires 50% plus one vote in both houses of Congress, his inclination for austerity, even during the pandemic when increased spending was needed, is another factor steering him away from a wide-ranging reform.

Lopez Obrador on Wednesday nominated current Finance Minister Arturo Herrera to the head the central bank and named an old ally to run the ministry. The changes are not expected to alter the president’s preferred approach of finding funds by cutting the cost of government rather than raising debt or new taxes.

“Tax increases are not being considered,” and they are not needed at this time in Mexico, Yorio said.