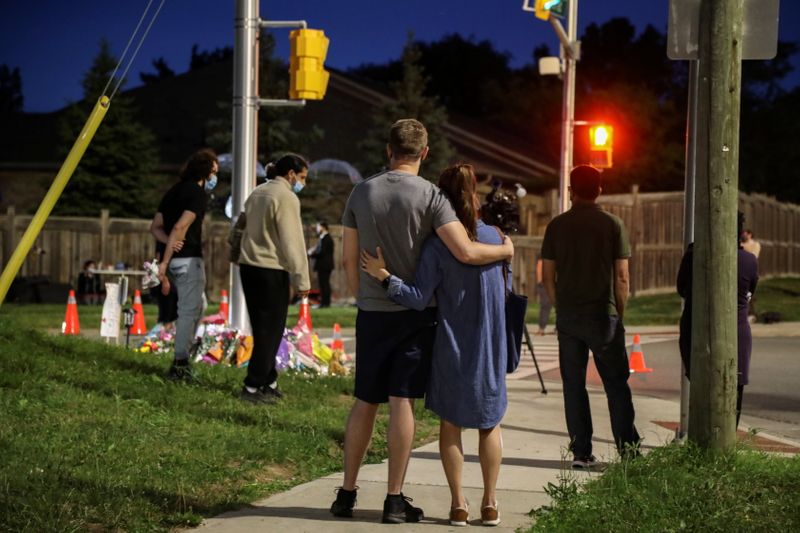 © Reuters. FILE PHOTO: People and members of the media are seen at a makeshift memorial at the fatal crime scene where a man driving a pickup truck jumped the curb and ran over a Muslim family in what police say was a deliberately targeted anti-Islamic hate crime, i

OTTAWA (Reuters) – The man accused of mowing down a Muslim family with his pickup truck in what Canadian police are calling a hate-motivated attack will appear in court on Thursday, with few details having emerged so far about the suspect in the deadly hit-and-run.

Nathaniel Veltman, 20, was arrested on Sunday in a London, Ontario, mall parking lot, a short distance from the city’s oldest mosque. He was wearing what appeared to be a body-armor-type vest at the time, police said.

The virtual court appearance at 9:15 a.m. (1315 GMT) is procedural and is unlikely to last more than a few minutes, a court official said. Veltman faces four charges of first-degree murder and one of attempted murder. He was initially in court on Monday when he was remanded to custody.

It was not yet known if he had a lawyer.

“The front part of the pickup truck was severely damaged” and was stained with blood, said Hasan Savehilaghi, president of a taxi firm, recounting details provided by one of his drivers, who was at the scene of the arrest.

Savehilaghi said that as the suspect was dragged from his truck by police, he was chanting, but his words were not clear. Veltman yelled at the taxi driver to film the arrest.

“He was enjoying the scene, like it was important for him to be recorded,” said Savehilaghi.

Police said on Monday that Veltman was not known to have links to any hate groups, but added that they were still investigating.

On Tuesday, Canadian Prime Minister Justin Trudeau called the killings a “terrorist attack” and vowed to clamp down on far-right groups and online hate.

Scant details about Veltman’s life have come to light.

He worked part-time at an egg-packing plant in Strathroy, Ontario, near London. Neighbors at his downtown London apartment said he could often be heard playing video games at high volume late at night, the London Free Press reported. London is about halfway between Toronto and Detroit.

As a teenager, Veltman participated in a number of road races, ranging from 5k to 10k, according to records available online.

The suspected attacker does not appear to have much of a social media presence. A blank Facebook (NASDAQ:) page with roughly a dozen “friends” was taken down by the social media company on Monday.

The Canadian Anti-Hate Network, a non-profit focused on monitoring hate groups, said the lack of a social media footprint was unusual for someone Veltman’s age. The group has not yet linked Veltman to any known hate groups.

“We’ve spoken with people who knew him. None of us know how … (Veltman’s) head got filled with hate in the first place,” said the group’s executive director, Evan Balgord, calling on the police to release more information.

Four members of one family, spanning three generations, were killed when the truck ran them over while they were out for an evening walk near their home. A fifth family member, a 9-year-old boy, remains in a hospital with serious injuries.

It was the worst attack against Canadian Muslims since a man gunned down six members of a Quebec City mosque in 2017.