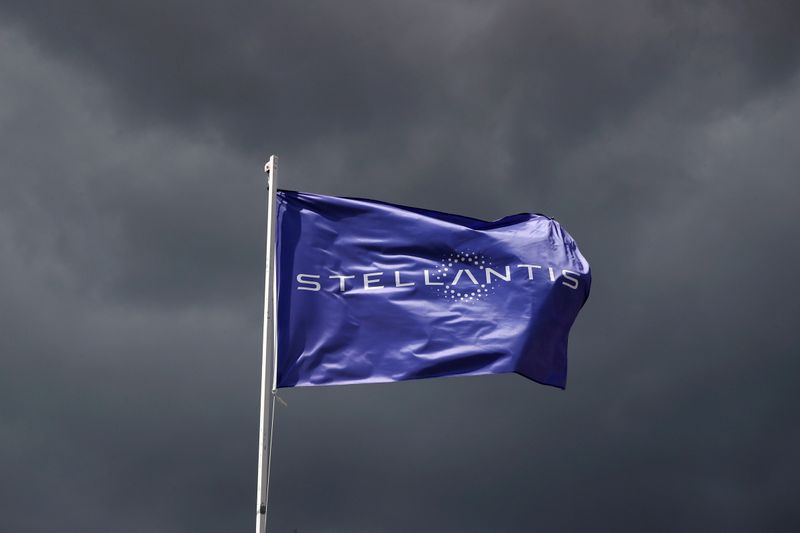 © Reuters. FILE PHOTO: A flag with the logo of Stellantis is seen at the company’s corporate office building in Saint-Quentin-en-Yvelines near Paris, France, May 5, 2021. REUTERS/Gonzalo Fuentes/File Photo

In the plan it sent Brussels in April to access EU Recovery Funds, Rome has earmarked around 600 million euros of public money for the project to build a gigafactory in Italy.

But it is confident this could trigger further investments from industrial and financial partners to bring the total to more than one billion euros, the sources said.

Rome’s plan is to set up a large public-private partnership (PPP) scheme with a stake held by Stellantis even though other options are also being considered, one of the sources said.

A second source said Stellantis had offered to play a leading role in implementing the plan.

Stellantis, formed by the merger of Fiat Chrysler and PSA, declined to comment.

The sources cautioned any plan would need the green light from Brussels to make sure it is compliant with competition and state aid rules.

Italy’s Recovery Plan envisages a 37 gigawatt hours (GWH) battery factory employing up to 500 new workers by 2030. The document targets some 1.8 billion euros in funding by that date though one ministry source said this was unlikely.

Stellantis, the world’s fourth largest carmaker, currently has two gigafactory projects in Europe, in France and in Germany, with overall investments of 5 billion euros.

It has said additional factories in Europe and in the United States will be decided in 2021 to support its shift to electric mobility.

Rome could face stiff competition from other EU countries, including Spain which is moving aggressively to land new battery and electric vehicle plants using billions of EU pandemic relief funds.

“There’s a lot of competition… we’ll have to offer a strong strategy and a credible team,” the ministry source said.

Oil slips again on surging U.S. dollar, but holds above $70 By Reuters