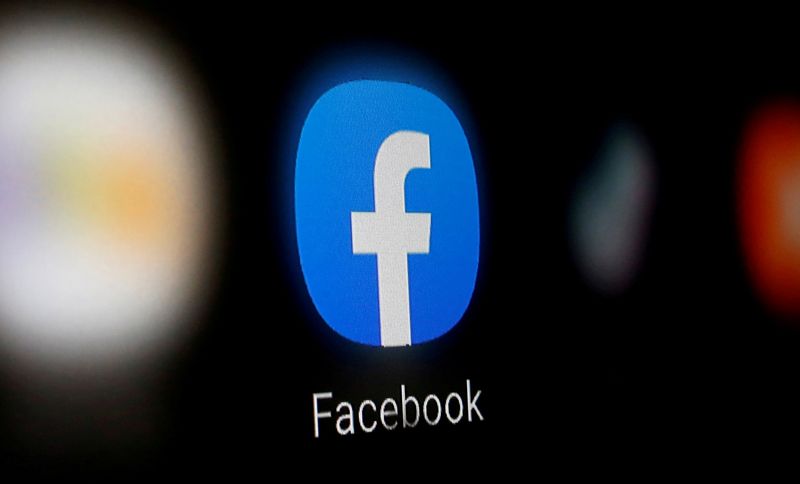 © Reuters. FILE PHOTO: A Facebook logo is displayed on a smartphone in this illustration taken January 6, 2020. REUTERS/Dado Ruvic/Illustration/File Photo

Thousands of media outlets received financial and other support for everything from fact checking and reporting to training, according to the tech giants’ announcements. Some publishers express gratitude for contributions they say are essential as advertising revenue has plunged.

But several media analysts and news business executives told Reuters that the funding – set to last three years – does not nearly compensate for the tens of billions of dollars publishers lost as the tech companies gobbled up the digital advertising market. Google and Facebook accounted for 54% of U.S. digital advertising revenue in 2020, according to eMarketer, a market research company.

Some critics dismissed the projects, including contributions of $300 million from each company, as a way to blunt complaints from publishers and generate good PR. Both tech companies face battles over compensation for news content worldwide, as well as antitrust lawsuits from regulators and publishers.

This “occasional benevolence” is “a drop in the bucket,” said Maribel Perez Wadsworth, publisher of Gannett’s USA Today and president of USA Today Network, which participates in a fact-checking program sponsored by Facebook. “News publishers are not looking for charity. We’re simply requesting a fair shot and a level playing field.”

Emily Bell, director of the Tow Center for Digital Journalism at Columbia University, said the money is vital to newsrooms in the short-term. “But they’re not given at a level which really has a lasting effect on the field, and it isn’t really changing anything.”

The tech giants told Reuters that they are genuinely committed to helping local and regional outlets, and both will continue to offer support after the $600 million initiatives expire in coming months.

The goal of the Facebook Journalism Project, as it is known, is to help publishers “effectively transition to and prosper in today’s digital world where they have to find a very specific audience in order to be successful,” said Campbell Brown, head of news partnerships at Facebook.

Google is “oriented around making sure that there’s a healthy and vibrant ecosystem of quality journalism,” said Ben Monnie, the company’s director of global partnerships.

Reuters participates in initiatives funded by both Google and Facebook. Under the Facebook Journalism Project, for instance, Reuters received funding to develop a digital media training course for journalists. Neither Facebook nor Reuters would disclose the amount of money allocated.

Both Facebook and Google have made contributions to the news industry apart from the $600 million. For instance, the companies dedicated $1 billion each last year in grants and deals to pay a range of media worldwide for content. As part of that commitment, Google pays publishers such as Reuters to create and curate content for its News Showcase – snippets for its News and Discover apps.

The Reuters Institute for the Study of Journalism, which is largely funded by the corporate foundation of Thomson Reuters (NYSE:), announced in 2020 that it received about $19 million in grants from Google and $4 million from Facebook.

Both Facebook and Google say publishers benefit just from using their platforms, which deliver traffic that helps drive advertising revenue and subscriptions.

“We are a free service that is available to anyone to post content,” Brown said. Publishers’ participation “suggests they are getting value from the platform without us making these additional investments.”

WHERE DID THE MONEY GO?

Facebook, a social media goliath, and Google, by far the world’s most popular search engine, generated $607 billion in advertising revenue during the last three years, according to company filings. The companies are among the biggest corporate funders of the global news industry.

The two platforms have released limited information so far about how the $600 million in grants and services has been spent, often offering broad descriptions or examples without financial details.

Google has publicly identified buckets of spending worth about $198 million – including $81 million aimed at “elevating quality journalism” such as training on how to use Google products in reporting. The company, which said it expects to spend the full $300 million by year’s end, lists over 6,250 “news partners” in the project, ranging from the Associated Press and BuzzFeed News to the Cook Islands News in the South Pacific.

Facebook has said that its $300 million has been fully spent, more than half of it in support of local news. The company’s public announcements account for $80.3 million, a quarter of which went to a program that helps local newsrooms attract more digital subscribers. A company spokesperson, Adam Isserlis, said the project also includes proprietary deals with publishers, the details of which are confidential.

Several news executives said they are prodding the tech giants to pay more for content and to further prioritize original reporting. Facebook and Google say they have already changed their algorithms to do just that.

Meanwhile, some publishers see a lifeline. An executive at the Post and Courier in Charleston, South Carolina, said a Google-funded training “lab” helped the paper determine the volume and price of digital subscribers that would cover expenses.

“I honestly think their big interest is that they want a healthy news environment,” he said.

Other publishers are dissatisfied or ambivalent, viewing the tech goliaths as both friend and foe.

The companies have a huge impact on outlets’ advertising revenues because their algorithms determine whether an article shows up prominently in a Google search or on Facebook’s news feed.

Google runs one of the largest online advertising exchanges for digital ads that are bought and sold automatically via software programs. Since Google competes as both the biggest buyer and seller on that exchange, it can steer business to itself, some publishers and other critics have alleged.

On June 7, under a settlement with France’s antitrust watchdog https://www.reuters.com/technology/french-watchdog-fines-google-220-mln-euros-abuse-market-power-ad-business-2021-06-07, Google agreed to share more data with ad buyers broadly – therefore reducing some of its competitive advantage over publishers.

Google and Facebook face other legal challenges https://www.reuters.com/article/tech-antitrust-google-facts-factbox-int/factbox-big-tech-comes-under-rapid-fire-from-five-u-s-lawsuits-more-probes-underway-idUSKBN28R39Q. The Nation, a progressive U.S. news website, and West Virginia-based newspaper company HD Media are among publishers https://www.reuters.com/technology/daily-mail-files-antitrust-lawsuit-against-google-2021-04-20 to file antitrust lawsuits against one or both tech giants in recent months. U.S. authorities have filed antitrust suits against both as well, and some states https://www.reuters.com/article/us-tech-antitrust-google/texas-nine-u-s-states-accuse-google-of-working-with-facebook-to-break-antitrust-law-idUSKBN28Q2RL have accused Google of unlawfully dominating the process of placing ads online.

In responses to some of the suits, the companies dismissed claims that their business practices hurt publishers. Google said people use the company because they choose to, not because they’re forced to.

The Seattle Times publisher said his paper has participated in programs backed by Google and Facebook. But “if they hadn’t monopolized advertising and gamed search the way they have, newspapers would still be making money,” he said.

When this indicator lights up, LUNA, MATIC and EGLD usually gain...

Bid of $28 million wins a rocket trip to space with...