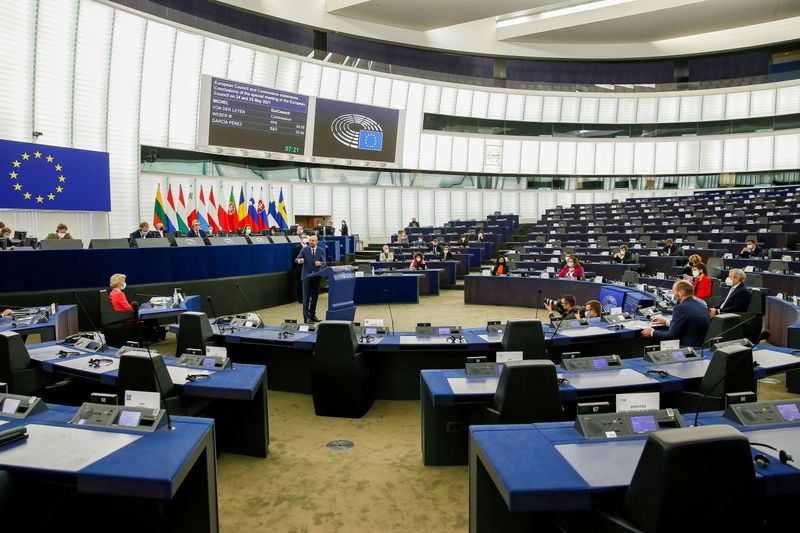 BRUSSELS (Reuters) – The European Commission could in September or October start its first investigations into whether EU governments sufficiently respect the rule of law to qualify for EU budget and recovery funds, EU Budget Commissioner Johannes Hahn said on Thursday.

This is likely to be a blow to Poland and Hungary, both of which are under formal EU investigation over breaches of rule of law standards and which had hoped for a much longer delay in the application of the rules which could freeze billions for them.

The Commission has been under pressure to start applying a new regulation, in force since Jan. 1, that links access to EU money for governments to respecting the rule of law.

But the Commission insisted it first wanted to prepare internal guidelines on how to apply the law, causing a delay that prompted the European Parliament to decide on Thursday to sue the Commission for inaction as guardian of EU rules.

The Commission is to have draft guidelines ready in two weeks, and finalise them, after consultations with the European Parliament and EU governments, by the “end of the summer”.

“We will adopt the guidelines somewhere in autumn, probably at the end of September or in October,” Hahn told reporters. “I would not exclude that we start the first action already at beginning of autumn to send what we call letters to potential member states,” he said.

He said there were several countries on a list of potential candidates to be investigated over the misuse of EU funds, but would not disclose any names as the list was not final.

The eurosceptic nationalist governments in Poland and Hungary strongly opposed the new law when it was negotiated by the 27-nation bloc last year. They only accepted it under a threat that they would otherwise be excluded from the EU’s 800 billion euro recovery fund of grants and cheap loans.

To further delay the application of the law, Poland and Hungary challenged it at the last possible moment in the EU’s top court in March, on the expectation that court procedures would take some two years – the average for the EU court.

The court procedure was to effectively freeze the application of the regulation, because the Commission had initially said it would wait on finalising its guidelines for the court ruling.

But Hahn said on Thursday the EU executive was no longer willing to wait. “I cannot predict when …the Court of Justice will come out with its ruling. We have to go our way,” he said.

He noted it took nine month to complete the whole procedure, from opening an inquiry into whether a country provided sufficient rule-of-law safeguards for EU cash to deciding on a possible freezing of the funds if the country was found lacking.

“If during our work we receive the court ruling, and I’m more than confident that it confirms our decisions, we can certainly react, if necessary, and adapt our guidelines, but of course we have to do what has to be done,” Hahn said.

But a nine-month process, started in October, would still mean a verdict no earlier than the middle of 2022 – well after parliamentary elections in Hungary that Prime Minister Viktor Orban wants to win without having to fend off charges of misuse of EU money during the campaign.

Sterling set for worst month vs dollar since September