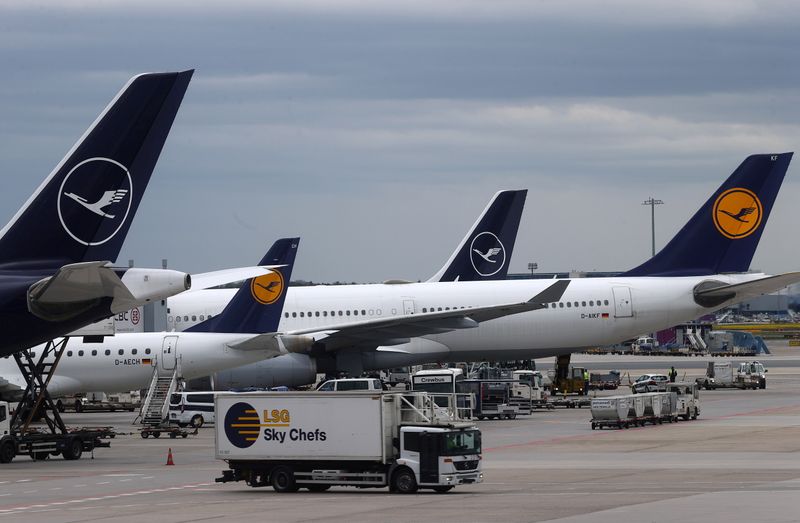 © Reuters. FILE PHOTO: Planes of German air carrier Lufthansa are photographed at the day of the airline’s annual general meeting at the airport in Frankfurt, Germany, May 4, 2021. REUTERS/Kai Pfaffenbach

PARIS (Reuters) – European airlines said on Thursday they will seek to weaken passenger compensation and refund rights in the wake of the COVID-19 pandemic, which left the industry struggling to reimburse billions of euros in fares for grounded flights.

Airlines for Europe (A4E), which represents the region’s biggest carriers, said the so-called EU261 regulation had severely exacerbated the financial crisis for many airlines.

“We’re looking for a more balanced approach to consumer protection,” Air France-KLM Chief Executive Ben Smith said, adding that the European Union’s passenger rights law was “one of the most punitive” in the world.

EU rules grant consumers immediate cash refunds for cancelled flights, plus compensation for those scrapped with less than two weeks’ notice or for delays of over three hours. Multibillion-euro refund bills exacerbated the cash crunch for many airlines early in the pandemic.

“When events like mass cancellations get put in place this law is not flexible enough to handle such events,” Smith said at an A4E virtual news conference, joined by the heads of easyJet (LON:), IAG (LON:), Lufthansa and Ryanair.

The European Commission indicated it was not ready to consider any weakening of passenger rights.

“We have always tried to strike the right balance between consumer protection and the protection of the tourism and transport industry,” an EU official said. “The continued and improved protection of passenger rights is crucial to ensuring the necessary consumer trust in the transport sector.”

“We are going to legally try this,” said Johan Lundgren, who is the current A4E chairman. “Amazingly these monopoly air navigation service providers are being allowed to pass on 5.4 billion euros to airlines and to our customers,” he said.