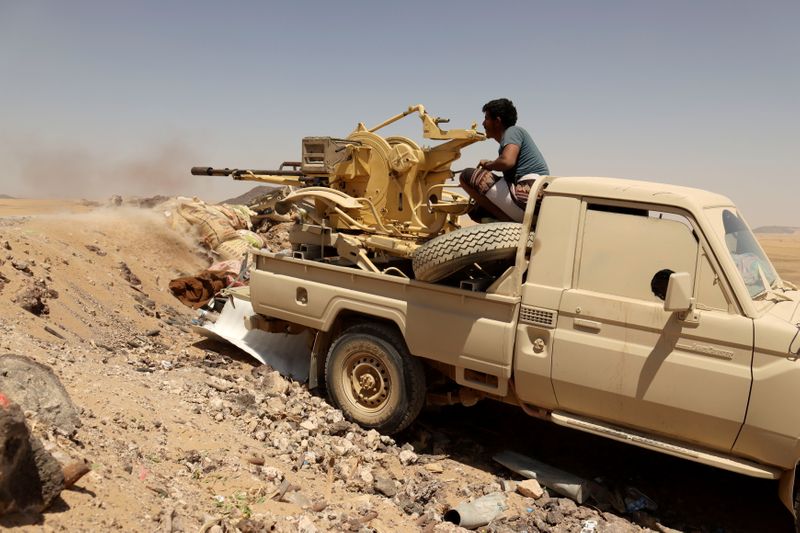 
ADEN (Reuters) -At least five people were killed in explosions that shook the Yemeni city of Marib, medical sources said, and which local and military officials blamed on Houthi missile and drone strikes.

An official said Houthi forces trying to seize gas-rich Marib fired a missile and a drone. An army spokesperson later told Al Hadath TV channel that two missiles hit a residential area and a market, and that two drones were launched.

Two medical sources told Reuters the hospital had received five people killed in the blasts and more than 15 injured. Another military spokesperson told Al Hadath that at least 8 people were killed and tens wounded.

There was no confirmation from the Iran-aligned Houthi movement, which has launched an offensive to take the internationally recognised government’s last stronghold in the north of the Arabian Peninsula country.

“The missiles fell on a residential neighbourhood and on a commercial market. There is no military activity there at all,” army spokesperson Yahya al-Hatmi told Saudi-owned Al Hadath.

He said one drone was shot down and the other exploded in midair.

“These are the strongest explosions we have heard in Marib in four years” resident Abdulsalam Ghaleb told Reuters.

Earlier this month at least 17 people were killed in an explosion near a petrol station in Marib. The government said it was caused by a Houthi missile, but the group said it had only hit a military camp.

Yemen has been mired in violence since the Houthis ousted the Saudi-backed government from the capital, Sanaa, in late 2014, prompting a military coalition led by Saudi Arabia to intervene months later.

The United Nations, backed by the United States, is pressing for a nationwide ceasefire and have called on the Iran-aligned Houthi movement to cease its offensive in Marib, which hosts around 1 million internally displaced people.

The conflict, widely seen in the region as a proxy war between Saudi Arabia and Iran, has caused what the United Nations says is the world’s largest humanitarian crisis.