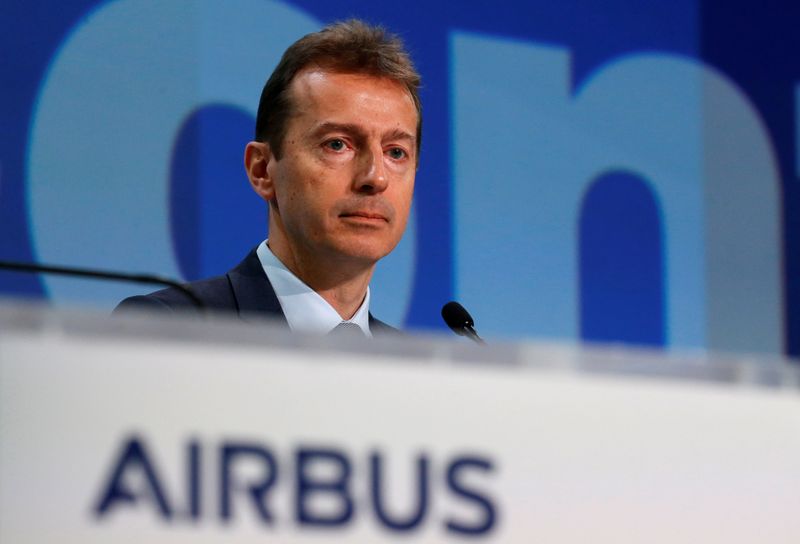 PARIS (Reuters) – Airbus Chief Executive Guillaume Faury said in remarks aired on Thursday that the planemaker is looking at how to evolve existing models, and he also voiced optimism about long-term progress toward hydrogen-powered aviation technology.

“We have a good portfolio of platforms; we believe the evolution will be on those platforms, on systems, connectivity, energy management and decarbonisation,” he told the A4E Aviation Summit, asked where Airbus’ main product development focus lay.

“We think those platforms have the potential to embed those changes on different systems including propulsion systems. So we are more looking at how we are going to evolve those platforms over time, as we are doing with the A321XLR and other products, with new variants,” he said in a pre-recorded interview.

Reuters reported in March that Airbus was studying a freighter version of its A350 jetliner.

Industry sources have said it also has studies codenamed “A321neo-plus-plus” or “A321 Ultimate” with more seats and new wings to defend its largest single-aisle model, whose success has prompted Boeing (NYSE:) to consider a 757 replacement.

Investors scrutinize comments from planemakers about the timing and scope of developments, especially the point at which they change generations of jets.

Analysts say that of the two planemakers, Airbus is most keen to maximise investment in the current generation of single aisle jets where it enjoys an upper hand against the Boeing 737 MAX, and to delay the start of a new industrial race until the 2030s.

Boeing is keeping options open. Last week, Boeing Chief Executive Dave Calhoun told a Bernstein conference that “it won’t be all that long” before it is ready to announce its intentions, which would go beyond tackling the A321XLR head-on and incorporate manufacturing improvements.

Looking further ahead, Airbus has championed hydrogen technology with plans to produce the first zero-emission commercial airplane by 2035.

“On the speed at which things are changing at the moment I am more and more optimistic every day,” Faury told A4E.