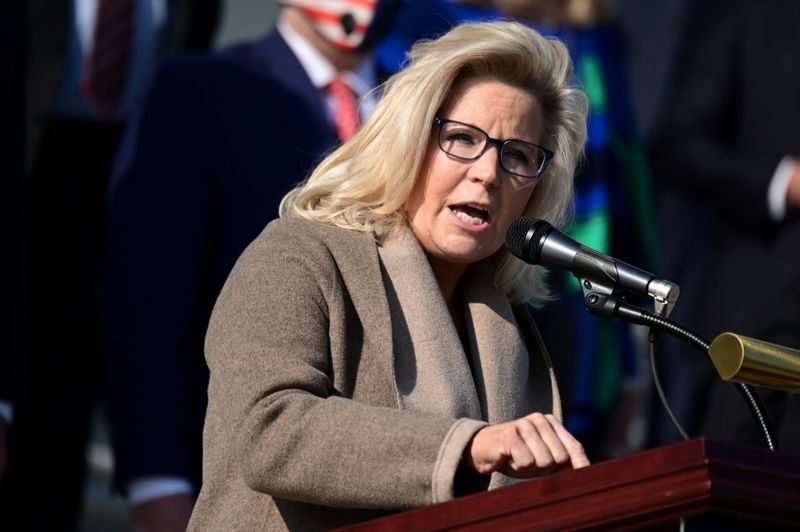 WASHINGTON (Reuters) – Republicans in the U.S. House of Representatives will vote on Wednesday whether to eject Liz Cheney, an outspoken critic of Donald Trump, from her leadership post, a move likely to cement their dependence on the former president in the 2022 elections.

Claiming that Cheney’s criticism of Trump is distracting from party messaging about Democrats and President Joe Biden’s agenda, Republicans will hold a secret ballot on whether to oust her as chair of the House Republican Conference. Another woman, Trump ally Elise Stefanik https://www.reuters.com/world/us/loyalty-trump-catapults-elise-stefanik-into-republican-stardom-2021-05-11, stands in the wings as her likely replacement.

Cheney, the No. 3 House Republican, who boasts sterling conservative credentials, has run afoul of House Republican leader Kevin McCarthy and others in her caucus by repeatedly denouncing Trump’s falsehoods about the 2020 election and insisting that the Republican Party be the “party of truth.”

In a defiant speech on the House floor on Tuesday night, Cheney blasted Trump for falsely claiming that November’s election was stolen from him, as well as the Republicans who support his allegation.

“I will not participate in that. I will not sit back and watch in silence, while others lead our party down a path that abandons the rule of law and joins the former president’s crusade to undermine our democracy.”

Most Republican lawmakers, including McCarthy, have sought to placate Trump, who continues to insist falsely that he lost the election because of widespread fraud, a claim that has been shot down in multiple courts as well as by state and federal election officials.

“It’s clear that we need to make a change,” McCarthy told his fellow Republicans in a letter announcing Wednesday’s vote. “These internal conflicts need to be resolved, so as to not detract from the efforts of our collective team.”

House Republican aides and party strategists said Cheney’s expected ouster could help Republicans in the short term by ensuring the party can count on Trump’s supporters at the start of the 2022 congressional election campaign, in which Republicans hope to reclaim majorities in the House and Senate.

“House members are very responsive to their base, and the Republican base continues to love Donald Trump,” said Republican strategist Alex Conant.

But the show of fealty to the former president has already opened House Republicans to claims that they are punishing a truth-teller in a move that could alienate swing voters whom Republicans will need to achieve their election goals.

The move against Cheney also stands in contrast to McCarthy’s decision not to act against Representatives Marjorie Taylor Greene and Matt Gaetz. The House’s Democratic leadership stripped Greene of her committee assignments for past incendiary remarks that included support for violence against Democrats, while Gaetz is the subject of a federal child sex-trafficking probe.

Cheney’s departure and Trump’s continued false election claims could further deepen divisions within the party, according to some Republicans.

Trump was impeached twice; presided over the Republican loss of the House, the Senate and the White House; and has been accused of inciting the Jan. 6 Capitol riot that left five people dead including a police officer.

Cheney, the daughter of former Vice President Dick Cheney, was among 10 House Republicans https://www.reuters.com/article/us-usa-trump-republicans-impeachment-fac/factbox-ten-republicans-back-trump-impeachment-after-storming-of-u-s-capitol-idUSKBN29I19H who voted to impeach Trump for inciting insurrection in January and now faces an uphill battle for re-election in her home state of Wyoming, where Trump is revered.

But the move to oust Cheney could also prove risky for McCarthy and other top Republicans if their embrace of Trump backfires or Stefanik proves to be unpopular as her replacement.

Stefanik, a New York Republican who rose to prominence within the party by defending Trump at hearings ahead of his 2019 impeachment, is backed by McCarthy, House No. 2 Republican Steve Scalise and Trump himself.

But her leadership candidacy has repelled conservatives who say she is too moderate.

Oil rises on optimism of quick recovery in global demand