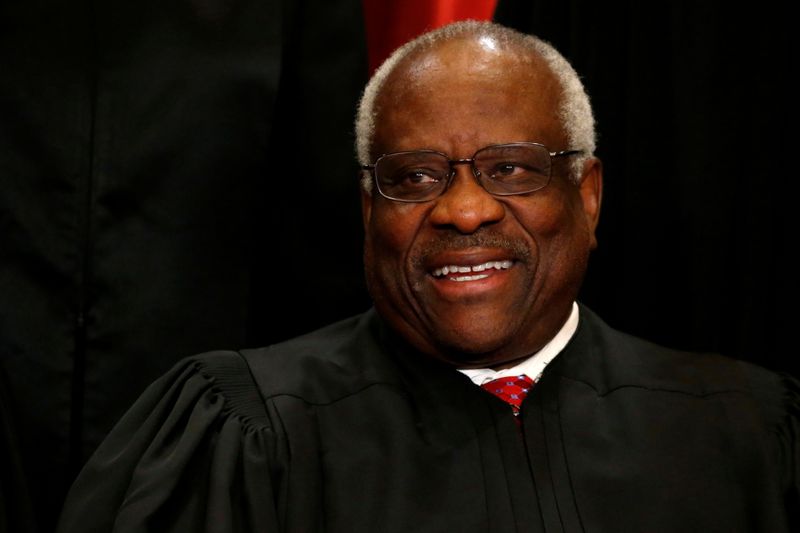 By Lawrence Hurley and Andrew Chung

WASHINGTON (Reuters) – When the U.S. Supreme Court heard its first-ever oral argument by teleconference rather than in person as a result of the COVID-19 pandemic, one major change was immediately clear: the normally silent Justice Clarence Thomas was asking questions.

Before that May 2020 case, Thomas had posed questions in only two oral arguments in the previous 14 years including a stretch of a full decade with none. Thomas appeared to enjoy the new teleconference format instantly as he weighed in on the court’s first case, a trademark dispute involving hotel reservation website Booking (NASDAQ:).com.

Thomas has been a regular participant in the 67 cases argued since then, showing his conservative leanings while asking probing questions of lawyers on both sides. Thomas occasionally joined in moments of levity such as when a lawyer in a March argument mistakenly addressed him, rather than John Roberts, as the chief justice.

“Thank you for the promotion, by the way,” Thomas said.

Thomas, 72, has served on the court since 1991, appointed by Republican former President George H.W. Bush to the lifetime post as only the second Black Supreme Court justice in U.S. history. He is the longest-serving justice among the current nine and the second oldest.

Last month, in a challenge by conservative groups to a California law that requires nonprofit organizations to disclose information about donors to the state, Thomas said he was concerned about people being deterred from giving money to groups with contentious views.

“For example, an organization that has certain views might be accused of being a white supremacist organization or racist or homophobic,” Thomas said https://www.reuters.com/world/us/us-supreme-court-weighs-conservative-groups-bid-conceal-donors-2021-04-26.

In an argument involving a Republican bid to invalidate the Obamacare healthcare law, Thomas last November asked whether someone would have legal standing to challenge a local ordinance requiring people to wear face masks during the pandemic.

“I assume that in most places there is no penalty for wearing a face mask … during COVID, but there is some degree of opprobrium if one does not wear it in certain settings. What if someone violates that command?” Thomas asked.

The pandemic prompted the court to close its doors in March 2020. In the subsequent teleconference oral arguments, it adopted a format more structured than its typical free-for-all questioning by the justices, with Chief Justice John Roberts playing the role of traffic cop and each justice asking questions in order of seniority.

The court has completed its oral arguments for its current nine-month term, with the remaining rulings due by the end of June. It will hear new cases again in October when it commences its next term. The court has not announced whether in-person arguments will resume then. If they do, it remains unclear whether Thomas would continue to make his voice heard.

The familiar rough-and-tumble in-person oral arguments often feature justices jockeying to get a word in and cutting each other off. Thomas has previously expressed his distaste for that format.

“I do think if Justice Thomas participates less – if the court goes back to the old format – that will be a real missing element now that people have seen how good his questions are and how helpful he can be teeing things up for the arguments,” said Sarah Harris, a lawyer who argued two cases by teleconference in the court’s current term and previously served as a Supreme Court clerk to Thomas.

He had gone a decade without speaking up before posing a question during a February 2016 gun rights case. His next question came in a March 2019 case about a Black death row inmate.

Thomas in the past has given various reasons for his usual silence. He told a group of students in 2000 that as a youngster he was self-conscious about his childhood accent, a local Black dialect unique to coastal Georgia.

In part to avoid the ridicule of classmates, Thomas said, “I just started developing the habit of listening.”

Thomas also has said his colleagues interrupt the lawyers too often during arguments rather than giving them time to explain their positions.

In another noteworthy innovation, the court for the first time began allowing a live audio feed after moving to the teleconference format. The tradition-bound court had long resisted live audio and any video of oral arguments. It has not announced whether live audio will continue after the pandemic.

Kannon Shanmugam, a lawyer who argued four cases during the pandemic, called the audio feed a “huge success” that is especially useful to those not in the courtroom, including journalists, lawyers, the public – and even close relatives.

“My mom dialed into my oral arguments and listened to them live,” Shanmugam said, “and, as is her wont, sent me comments afterward.”