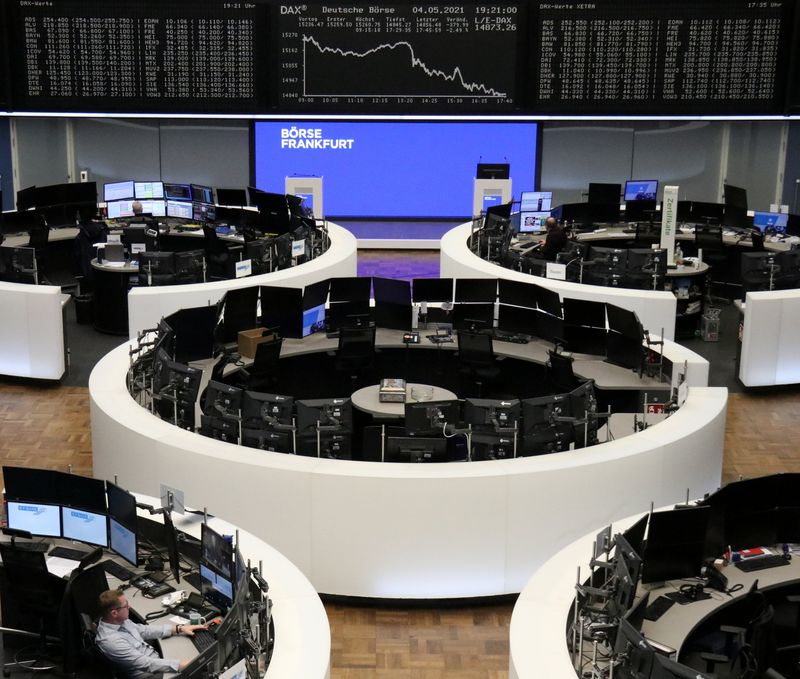 © Reuters. The German share price index DAX graph is pictured at the stock exchange in Frankfurt, Germany, May 4, 2021. REUTERS/Staff


By Sruthi Shankar and Ambar Warrick

(Reuters) – European stocks edged lower on Thursday, with the travel sector leading declines on weak results from Britain’s Trainline, while food and beverage stocks hit a 14-month high on a batch of strong earnings.

Heavyweight oil stocks were among the top drags on the STOXX 600 as oil prices slipped, while technology shares fell in tandem with their U.S. peers. ()

Investors also appeared to be spooked by the Bank of England slowing the pace of its trillion dollar bond-purchasing programme, although it stressed that the decision was not a change in the stance of monetary policy.

Still, the prospect of policy tightening by major central banks has rattled markets this year, on fears that a bigger-than-expected rise in inflation could push up interest rates sooner than expected.

“For now, the Bank is taking a leaf out of the Federal Reserve’s book, offering a fairly vague signal that tightening won’t come until the recovery has made significant progress”, ING analysts wrote in a note.

“However in the not-too-distant future, we expect the Bank will offer further details on how it might reduce its gilt holdings alongside future rate hikes.”

Still, the bank’s optimistic view on a British economic recovery pushed the 0.5% higher to a more than 14-month peak.

More than half of the STOXX 600 companies have reported earnings so far and 73% of those have topped profit expectations, according to Refinitiv IBES data.

Food and beverage stocks were the best performers for the day, pushed up by a 5.2% rise in Anheuser-Busch InBev after it reported first-quarter earnings ahead of expectations and said North America boss Michel Doukeris will replace Carlos Brito as chief executive officer.

Irish food processing firm Glanbia was the top gainer in the sector, after its first-quarter revenue rose more than 10%.

Telecom Italia (MI:) slid 5.5% after a report suggesting the government is set to drop a plan to create a single broadband network.