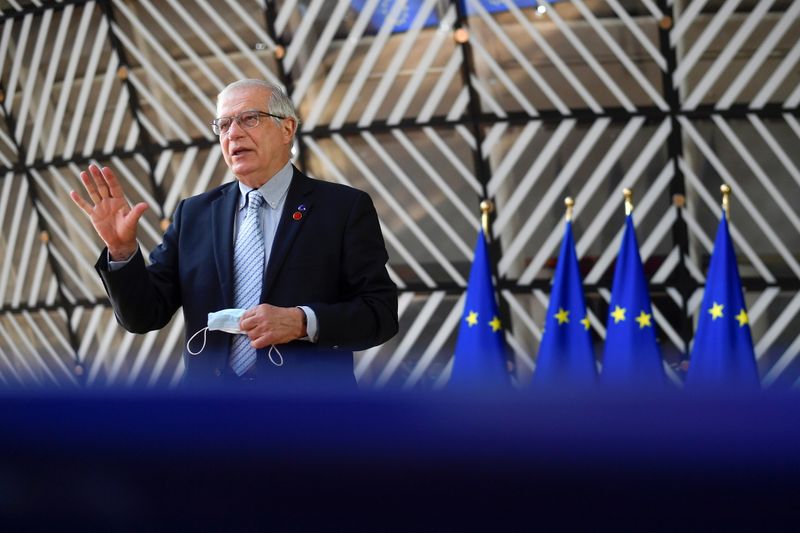 © Reuters. European Union for Foreign Affairs and Security Policy Josep Borrell talks during a statement before a Defence ministers meeting at the EU headquarters in Brussels, Belgium May 6, 2021. John Thys/Pool via REUTERS

Mozambique’s government has been facing an Islamist insurgency since 2017 and rebels have stepped up attacks in the past year, threatening projects that are aimed at transforming the impoverished country’s economy.

Mozambique wrote to the EU last year to ask for help in training its armed forces to battle the insurgency, and Borrell said it was important for the bloc to make up its mind quickly. EU defence ministers discussed the possibility of a mission in Brussels on Thursday, but took no decision.

“The Mozambique government has been asking for help, we will try to send a training mission…in order to contain the security situation,” Borrell said. Asked if a force could be sent by the end of this year, Borrell said such a time horizon was too long and that the EU should act sooner.

“If we are not able to send the mission by the end of this year, I would not consider this as a good result. I would hope we would do it before,” he told a news conference.

Borrell said any mission would be similar to the EU’s involvement in West Africa’s Sahel region, where its experts provide training and advice to national security forces that are grappling with Islamist insurgencies.

He also clarified that the mission to Mozambique, if agreed, would be a military, rather than civilian mission, meaning armed forces from EU states would send military instructors.

European soldiers would also need to be prepared to guard troops against attacks in so-called force protection.

“Portugal has already offered half of the staff and sent military instructors but that has to be considered as an advance to be integrated into a European Union training mission if we finally agree,” Borrell said.

“The political will is there,” he said.

Mozambique is a former Portuguese colony.

The EU is also looking into the creation of a rapid response force of some 5,000 soldiers to intervene in international crises, although the plans are only at a conceptual stage and would not be ready to support Mozambique.

Enbridge Set to Debut in the Sustainability-Linked Bond Market

JPMorgan, UBS to allow U.S. employees take day off for Juneteenth By Reuters