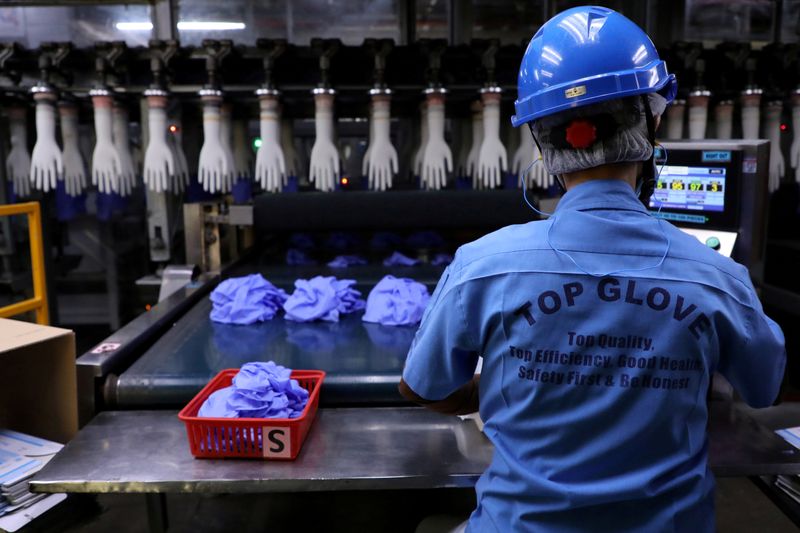 
KUALA LUMPUR (Reuters) -The U.S. Customs and Border Protection (CBP) said on Wednesday it seized a shipment of disposable gloves from Malaysia’s Top Glove Corp Bhd estimated to be worth $518,000, on indications they were made by forced labour.

The U.S. agency did not give a date for the seizure of the 3.97 million nitrile gloves, which comes after it detained imports from two of Top Glove’s subsidiaries last July, saying it had found reasonable suspicion of forced labour.

In March, the CBP said it had sufficient information to determine the use of forced labour and directed U.S. ports to seize all disposable gloves originating in Top Glove factories in Malaysia.

Top Glove said last week it had resolved all indicators of forced labour at its operations, citing a verification report by the ethical trade consultancy it hired.

“The U.S. CBP is currently reviewing our submission on the back of the company having remediated the 11 International Labour Organization’s forced labour indicators,” Top Glove said on Wednesday in a stock exchange filing, adding that it continues to work closely with the U.S. agency.

The manufacturer has said it expects the U.S. import ban to have only a minimal impact on its sales from Malaysia.

CBP said in a statement on Wednesday it had found indicators including debt bondage, excessive overtime, abusive working and living conditions, and retention of identity documents.

“CBP continues to facilitate the importation of legitimate PPE needed for the COVID-19 pandemic while ensuring that the PPE is authorized and safe for use,” said Diann Rodriguez, Area Port Director-Cleveland, referring to personal protective equipment.