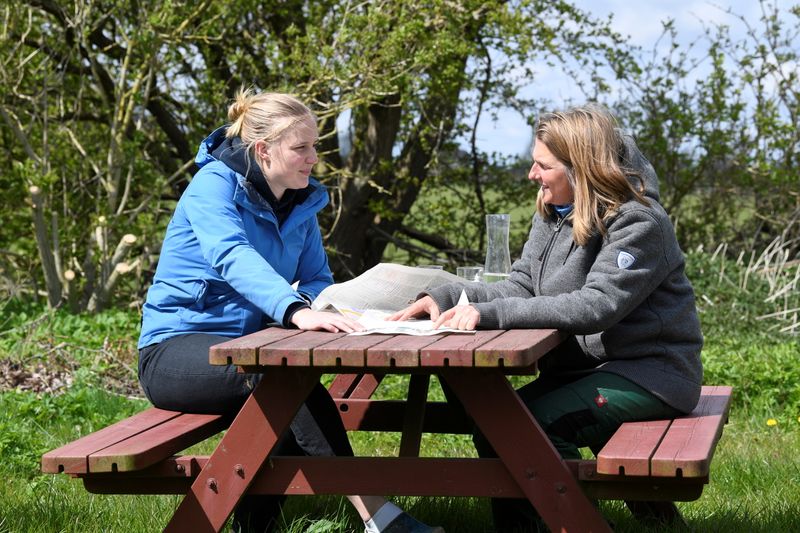 © Reuters. Sophie Backsen, 22, daughter of a farming family which forced Germany by court to tighten its climate law, talks with her mother Silke on the North Sea island of Pellworm, Germany May 3, 2021. Picture taken May 3, 2021. REUTERS/Fabian Bimmer

By Stephan Schepers and Tobias Schlie

PELLWORM, Germany (Reuters) – If the North Sea island of Pellworm vanishes beneath the waves it will take with it the 300-year-old family farm of Sophie Backsen, 22, who last week won a court judgment forcing Germany to take swifter action to combat climate change.

Backsen was one of a group of plaintiffs who challenged Germany’s 2019 climate law, saying that by moving too slowly to cut greenhouse gas emissions, Germany was stealing from younger generations.

“Pellworm is simply my home, my homeland. This is where I grew up. Our farm is here. And that would be a huge loss for me,” she said, walking along a dyke under a low grey sky.

The island has an average elevation of just two metres above sea level. It is home to the 180-hectare farm, with 100 sheep and several hundred cattle, that has been in the family for generations, was converted to organic by her father and forms the inheritance of Backsen and her four siblings.

“I could still live somewhere else, but at the moment I just couldn’t imagine that,” she said.

Politicians, including those who passed the 2019 law, rushed to welcome the court ruling, which came four months ahead of a national election in which the opposition Greens, surging in the polls, are increasingly seen as the party to beat.

But for Backsen the fight is personal, with some climate scientists predicting that melting ice and warming oceans could raise sea levels far enough to drown Pellworm by the end of the century.

“Sometimes you think to yourself: Hey, guys, that can’t be. You can’t leave it like that for us,” she said.

That view was endorsed on Thursday by Germany’s Constitutional Court which said that by leaving the bulk of emissions cuts until after 2030, the 2019 law was placing a disproportionate burden on the young.

It ruled that Germany must update the law by the end of next year to set out how it will bring carbon emissions down to almost zero by 2050.