‘The Challenge’ alum admits to looking ‘up to the heavens a lot to speak with my daughter’ after 8-month-old Azaylia Diamond Cain succumbed to leukemia last month.

Giving an update on his grieving process, the 30-year-old took to Instagram on Tuesday, May 4 to share a photo from his morning run. In the image, Ashley’s face was barely seen as it was mostly cropped out, while the sky in the background was particularly highlighted with an orange circle.

In the caption, he explained why the photo was so meaningful to him. “Someone sent me this screenshot today from my story when I was out running and I couldn’t believe it,” he wrote. “I’m finding a lot of peace in the sky at the moment. From beaming orange sky’s at night, to clouds that form my daughters face in the day.”

The former contestant of “The Challenge” season 33 went on admitting that he often looks up to the sky to talk to his daughter. “I’ve never paid too much attention to the sky, but now I look up to the heavens a lot to speak with my daughter, it’s like she’s showing me signs that she’s listening,” he shared. “So many of you have told me that she will always be watching over me and over the past few days, I really believe it.” He concluded it, “LETS GO CHAMP – I LOVE YOU.”

Ashley has taken the heart of social media users with his heartbreaking story of his daughter’s cancer battle. Diagnosed with an aggressive form of leukaemia at eight weeks old, Azaylia succumbed to her illness on April 24, though the father had been optimistic she won’t be “going anywhere.”

On Sunday, May 2, Ashley’s partner and Azaylia’s mother Safiyya Vorajee revealed that she “[struggles] all through the day & night…” following her daughter’s passing. “When the journey I was on was difficult mentally I didn’t realise it was going to get harder,” she confided on her Instagram Story.

She continued, “Looking after my baby in hospital from 8 weeks old wasn’t the way I was expecting to become a mummy But I counted everyday as a blessing that I am azaylias mummy and would give her my 100% everyday! I studied every part of her diagnosis I learnt all her medicine because I wouldn’t have done nothing less for my baby.”

“Struggling mentally with losing my baby. My days feel so empty My life feels so lost My body feels so alone,” Safiyya further admitted. “But my soul feels so full, my spiritual alert feels so engaged more than ever. this is because Azaylia has given me a reason to connect with life in such a different way.” 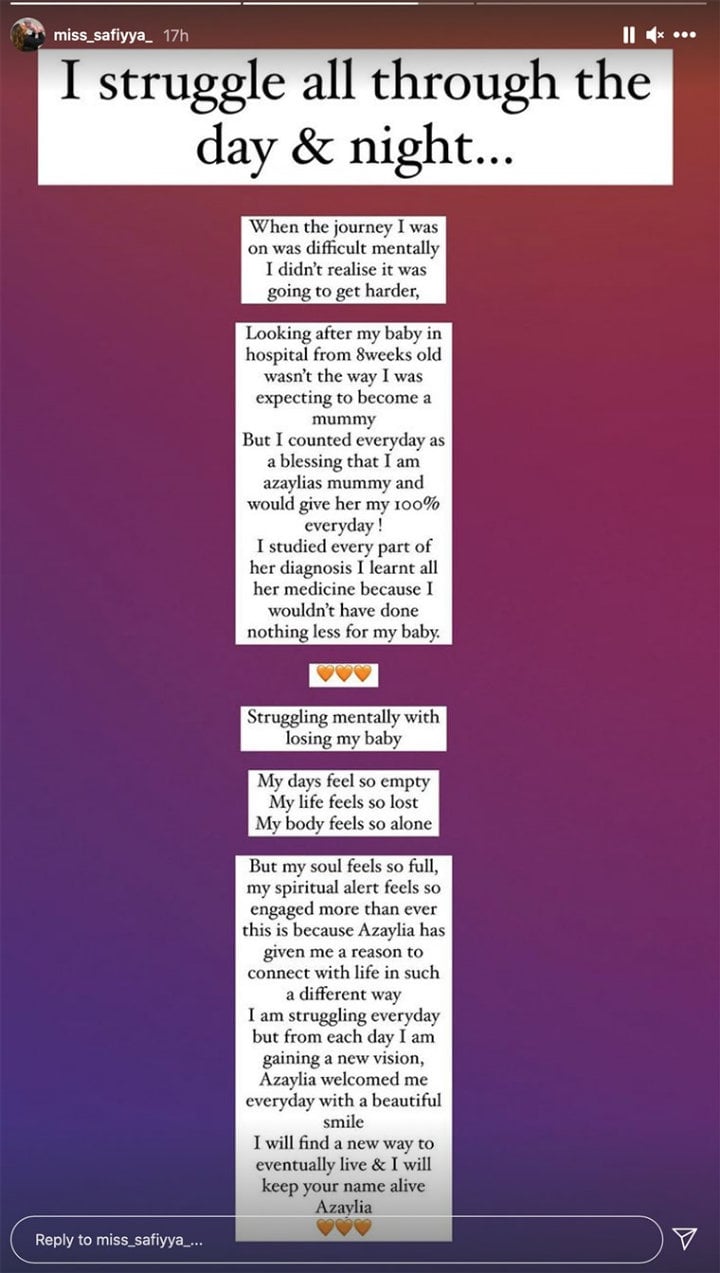 Safiyya Vorajee opened up about her grief after her daughter Azaylia’s death.

She added, “I am struggling everyday but from each day I am gaining a new vision, Azaylia welcomed me everyday with a beautiful smile. I will find a new way to eventually live & I will keep your name alive Azaylia.”