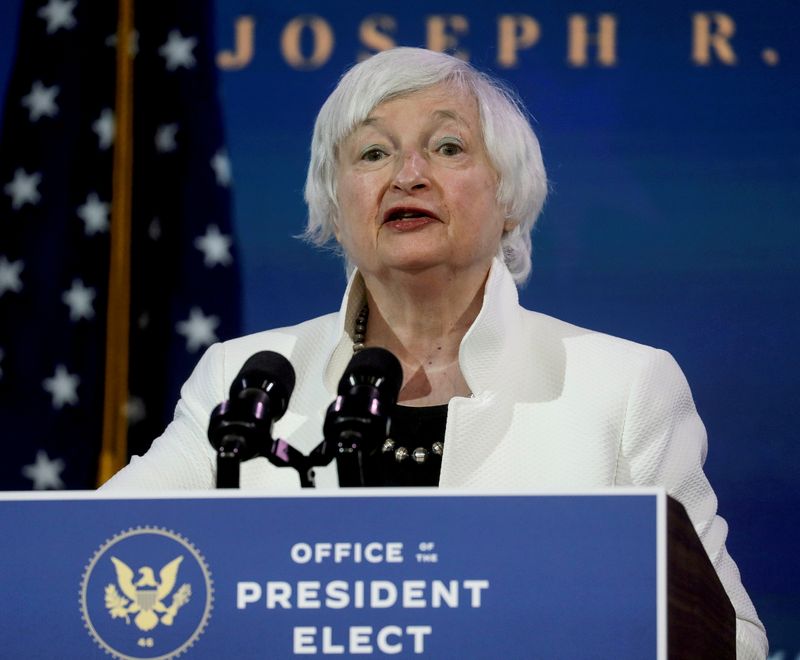 
By Ann Saphir and David Lawder

The initial comments made by Yellen, a former Federal Reserve chair, deepened a sell-off in tech stocks and pushed longer-dated Treasury yields higher.

“It may be that interest rates will have to rise somewhat to make sure that our economy doesn’t overheat, even though the additional spending is relatively small relative to the size of the economy,” Yellen said in taped remarks to a virtual event put on by The Atlantic.

“It could cause some very modest increases in interest rates to get that reallocation, but these are investments our economy needs to be competitive and to be productive (and) I think that our economy will grow faster because of them.”

Later on Tuesday, Yellen told a Wall Street Journal CEO Council event that she does not anticipate that inflation would be a problem for the U.S. economy and that any price increases would be transitory because of supply chain shortages and the rebound in oil prices to pre-pandemic levels.

Asked directly about her remarks on rates, Yellen said she was neither predicting nor recommending a rate rise.

“If anybody appreciates the independence of the Fed, I think that person is me,” Yellen said.

“I don’t think there’s going to be an inflationary problem. But if there is the Fed will be counted on to address them,” she added.

Treasury bond yields have risen sharply this year, especially in the first quarter, on growing expectations for an economic recovery from the coronavirus recession.

“I don’t think it was meant to be an impactful statement that yields will have to rise now,” TD Securities interest rate strategist Gennadiy Goldberg, said of Yellen’s initial remarks.

The yield on the benchmark 10-year Treasury note was 1.58% on Tuesday.

Fed officials, including Chair Jerome Powell, have said the move reflects confidence in the economy rather than expectations the central bank would start dialing back ultra-accommodative policy. Powell has said repeatedly the Fed is nowhere close to beginning that process.

Yellen said during The Atlantic event the main goal of Biden’s programs is to help reverse decades of widening economic inequality.

The programs, which include stepped-up spending on infrastructure, childcare and education, will make a “big difference” to inequality, Yellen said.

Republicans have criticized the proposed tax increases Biden expects to use to pay for his proposals, but Yellen said the effect of a change in tax rates is “much less powerful in influencing growth in either direction,” adding that her aim is to make sure government deficits “stay small and manageable.”

Gold Back Above $1,800 But Late to Inflation Party By Investing.com