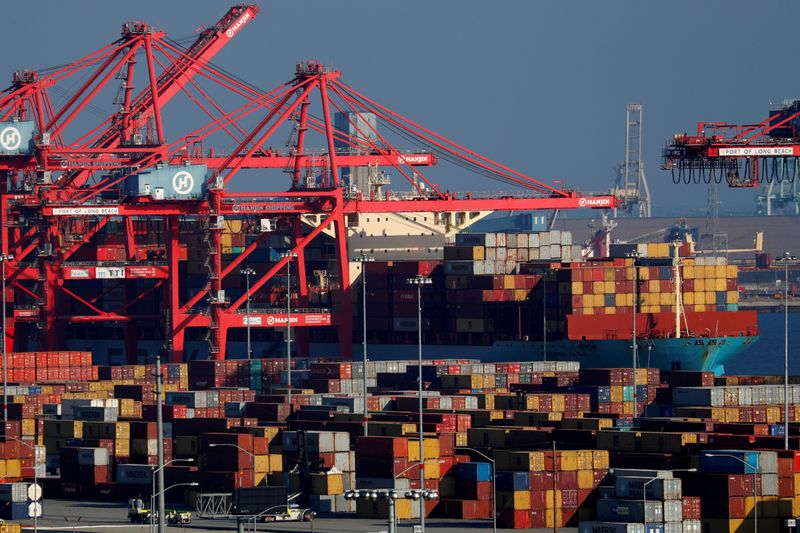 WASHINGTON (Reuters) -The U.S. trade deficit jumped to a record high in March amid roaring domestic demand, which is drawing in imports, and the gap could widen further as the nation’s economic activity rebounds faster than its global rivals.

The White House’s $1.9 trillion pandemic relief package and the expansion of the COVID-19 vaccination program to all adult Americans have led to a boom in demand, which is pushing against supply constraints. Economic activity is also being boosted by the Federal Reserve’s ultra-easy monetary policy stance.

Manufacturers lack the capacity to satisfy the surge in demand and inventories are very lean, forcing businesses to import more goods. Demand during the pandemic also shifted to goods from services, with Americans cooped up at home.

The trade deficit increased 5.6% to an all-time high of $74.4 billion in March, the Commerce Department said on Tuesday. The trade gap was in line with economists’ expectations.

Imports soared 6.3% to record high $274.5 billion in March. Goods imports shot up 7.0% to $234.4 billion, also a record high. Imports of consumer goods were the highest on record, as were those for food and capital goods. The nation imported a range of goods including apparel, furniture, toys, semiconductors, motor vehicles, petroleum products and telecommunications equipment.

But imports of civilian aircraft and cellphones fell.

Exports surged 6.6% to $200.0 billion. Exports of goods vaulted 8.9% to $142.9 billion. They were led by industrial supplies and materials, capital and consumer goods. The pandemic remained a drag on services exports, especially travel. At $17.1 billion in March, the services surplus was the smallest since August 2012.

When adjusted for inflation, the goods trade deficit surged $4.2 billion to a record $103.1 billion in March. The deterioration in the trade deficit was flagged in an advance report published last week.

Despite the wider trade deficit, the economy grew at a 6.4% annualized rate in the first quarter, the second-fastest gross domestic product growth pace since the third quarter of 2003, fueled by pent-up domestic demand. That followed a 4.3% growth pace in the fourth quarter.

Most economists expect double-digit GDP growth this quarter, which would position the economy to achieve growth of at least 7%, which would be the fastest since 1984. The economy contracted 3.5% in 2020, its worst performance in 74 years.