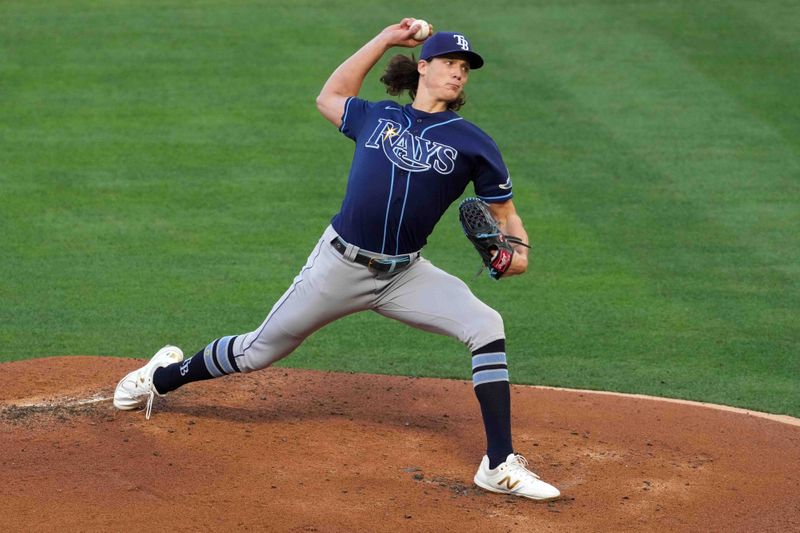 Glasnow (4-1) allowed three runs on four hits with four walks and eight strikeouts. Three Rays relievers then shut out the Angels on two hits over the final three innings.

Willy Adames and Manuel Margot homered for the Rays while Shohei Ohtani and Anthony Rendon went deep for the Angels. Ohtani was scratched from his scheduled start on the mound after getting hit by a pitch on his right elbow Sunday.

Rendon exited the game in the eighth inning after fouling a ball off his left knee. X-rays were negative, and he is listed as day-to-day with a bruised knee, the team announced.

Starting and winning pitcher Vince Velasquez (1-0) retired his final 10 batters and allowed four hits and one run over six innings. He struck out six and walked two.

Hector Neris earned his sixth save of the season by getting five outs.

J.T. Realmuto gave the Phillies the lead with a two-run home run in the bottom of the first inning and Didi Gregorius had two hits.

Lorenzo Cain homered for Milwaukee in his return from the injured list.

Wil Myers grounded a single to right to break up Tyler Anderson’s no-hit bid with no outs in the seventh, triggering a two-run rally that led host San Diego past Pittsburgh.

Anderson had faced only two hitters over the minimum when he walked Manny Machado to open the seventh. Myers’ hit moved Machado to third, and he scored on Tommy Pham’s sacrifice fly. Austin Nola’s double scored Myers.

Anderson (2-3) allowed two runs on two hits and three walks with five strikeouts in 6 2/3 innings. Tim Hill (2-2), the Padres’ fourth of six pitchers, picked up the win, and Mark Melancon racked up his 10th save with a one-hit ninth.

Ramon Laureano broke a fifth-inning tie with a two-run home run, his third blast in his last three games, and host Oakland opened a four-game series against Toronto on a winning note.

Vladimir Guerrero Jr. collected a double and two singles for Toronto, which saw a three-game winning streak come to an end in the opener of a 10-game trip. Blue Jays starter and loser Steven Matz (4-2) went five innings, charged with five runs on seven hits. He walked one and fanned six.

Jorge Polanco had a triple, a double and two RBIs while Kenta Maeda struck out eight over 5 1/3 scoreless innings as Minnesota held on for a victory over Texas in Minneapolis.

Alex Kirilloff doubled twice, scored three times and drove in a run for the Twins, who led 5-0 after seven innings. Minnesota won for the fourth time in five games following a stretch in which it lost eight of nine games, with three games postponed in that run because of COVID-19 considerations.

Maeda (2-2) yielded just two hits along with two walks and was removed after throwing 94 pitches. Adolis Garcia and Joey Gallo hit two-run homers for the Rangers.

Eddie Rosario hit a three-run home run in the seventh inning to break up a tie game and Josh Naylor hit a two-run shot later in the inning as Cleveland emerged with a win at Kansas City.

Bryan Shaw (1-0) earned the win after getting out of a bases-loaded jam in the sixth inning. Emmanuel Clase pitched a scoreless ninth to pick up his sixth save in seven chances.

The Royals scored three in the bottom of the seventh but couldn’t come all the way back in the opener of a four-game series. Lefty Daniel Lynch, Kansas City’s top prospect, allowed three runs in 4 2/3 innings during his major league debut.

Cedric Mullins and Freddy Galvis hit home runs in a five-run eighth inning as Baltimore defeated host Seattle in the opener of a three-game series.

Baltimore’s Cole Sulser (1-0) got the victory with a scoreless inning of relief. Cesar Valdez pitched a 1-2-3 ninth for his seventh save of the season, striking out Jose Marmolejos and Dylan Moore swinging to end the game.