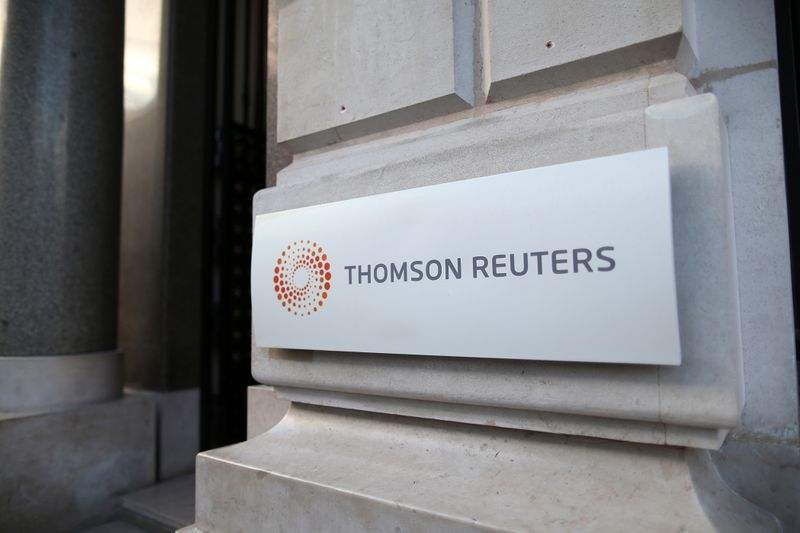 © Reuters. FILE PHOTO: The logo of Thomson Reuters is pictured at the entrance of its Paris headquarters, France, March 7, 2016. REUTERS/Charles Platiau


By Kenneth Li and Nick Zieminski

Adjusted earnings per share, which excluded a gain from the sale of the Thomson Reuters (NYSE:)’ investment in Refinitiv and other adjustments, rose to 58 cents per share, well ahead of the 42 cents forecast by analysts.

That excludes a gain from the sale of a stake in data and analytics company Refinitiv to the London Stock Exchange Group (LON:). Thomson Reuters holds a 15% stake in the LSE following the Refinitiv deal, which closed in January.

Thomson Reuters, which owns Reuters News, said in a statement that its overall operating profit rose by a third to $387 million during the first quarter.

Total sales were up 4% to $1.58 billion, ahead of estimates, and Thomson Reuters said they are forecast to grow 3.5% to 4% for the full year. It said second-quarter revenue growth will be the year’s high point, reflecting the improvement from the same period last year, when the impact of the COVID-19 pandemic hit.

Its New York and Toronto listed shares both gained more than 4% in early trading.

“We’re pleased with the start of the year and our results and we’re cautiously optimistic that the economies in which we operate are starting to recover and showing upside and promise for the rest of the year,” Chief Executive Steve Hasker said in an interview after the results.

However, he cautioned that risks remained as the coronavirus pandemic has surged in some parts of the world.

Hasker said Thomson Reuters could announce potential takeover targets in the second half of 2021, but noted that asset prices are “full” at present.

The company’s Reuters News segment grew sales by 2% to $160 million in the quarter, helped by its professional business.

Reuters last month unveiled a new subscription website as part of a broad initiative to court business professionals, joining many other major news organizations which already charge for their content.

Also in April, Reuters named one of its top editors, Alessandra Galloni, as its next editor-in-chief. Galloni is the first woman to lead the globe-spanning news organization in its 170-year history.

More than 15,000 people from Myanmar shelter in Indian border state