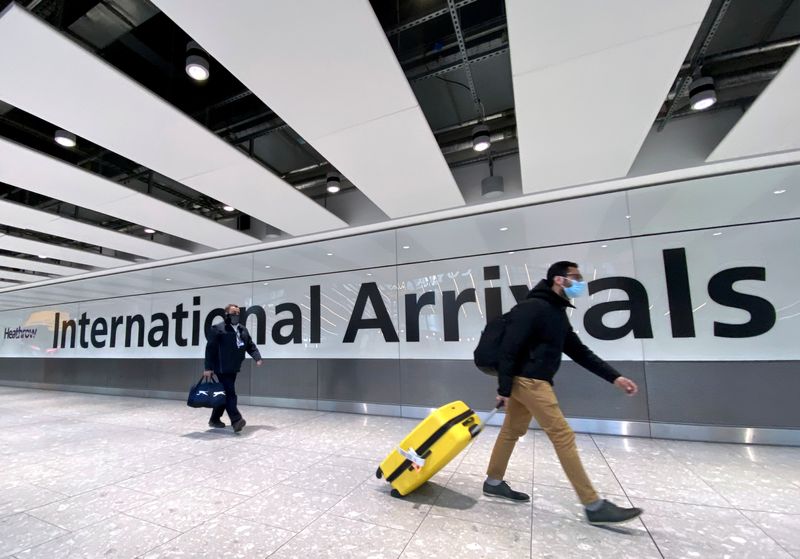 By Laurence Frost and Sarah Young

PARIS/LONDON (Reuters) – Diplomatic moves to ease transatlantic air travel could unleash fierce competition to entice passengers back into near-empty cabins at a time when tottering airlines can ill afford a price war in the world’s richest aviation market.

Talks between Brussels and Washington on resuming mass travel for vaccinated tourists have raised hopes of a summer rebound – further buoyed by new EU reopening proposals.

Airlines are desperate for good news after a year of COVID-19 lockdowns that pushed many to the brink of collapse, or into the arms of governments.

The United States will reopen to Europeans in “a matter of the next two or three weeks”, Lufthansa Chief Executive Carsten Spohr predicted last week.

But the German airline boss also cautioned against any race to the bottom on fares.

“The North Atlantic is historically the most disciplined traffic region,” Spohr told investors. “I expect this discipline (to) prevail.”

Consumers are showing some interest.

Air France-KLM said U.S. sales twitched back to life last month after French President Emmanuel Macron announced restrictions may be eased for vaccinated Americans – and again when the EU confirmed talks with Washington.

Air France is adding a Paris-Denver service, in what network chief Olivier Piette described as a “big bet” on a secondary U.S. leisure route with less direct competition.

The Franco-Dutch group is partnered with Delta and Virgin Atlantic in one of three transatlantic joint-ventures that allow extensive commercial cooperation. Lufthansa is paired with United, and British Airways with American.

Virgin is expecting a scrap, Chief Executive Shai Weiss said recently. “I’m sure there’s going to be tremendous competition and we’ll rise to it.”

“The bean counters will be keeping a close eye on that,” he said. “Investors will also want to see airlines behaving responsibly in the recovery.”

DISNEY AND A DOSE OF REALITY

Airlines currently plan about 65% of pre-crisis transatlantic capacity in the third quarter, according to OAG – but many flights could end up cancelled.

Mid-sized Boeing (NYSE:) 787s and Airbus A350s will be summer favourites, OAG expects, thanks to fuel efficiency and freight capacity. Grounded 747s and A380 superjumbos are unlikely to return so soon.

Summer bookings are just a fifth of their level at the same point in 2019, separate ForwardKeys data show.

Greece, which has been promising unfettered access for visitors with vaccines or negative tests, is so far the standout destination for U.S. tourists with sales at 74% of pre-crisis levels.

For Britons, Disney World remains a draw, with Orlando, Florida bookings down 52%, a relatively strong showing.

American Airlines revenue chief Vasu Raja offered a “dose of reality” on summer traffic to Europe. “A lot of the customers that would have gone there have already booked trips to Hawaii or Florida anyway,” he told investors.

European carriers such as Virgin and British Airways have more at stake in the North Atlantic than U.S. peers cushioned by a rebounding domestic market. Hopes are high for a return to quarantine-free travel between Britain and the United States.

Soaring cargo rates have allowed airlines to keep routes open with low passenger occupancy and may limit the competitive drive to slash fares as demand picks up.

Air France is serving 11 U.S. cities – increasing to 12 with Denver – with A350s, 787s and first class-equipped 777s whose freight loads largely cover the costs of running the flight.

“It’s thanks to cargo that we’ve been able to maintain our long-haul programme,” said Piette.