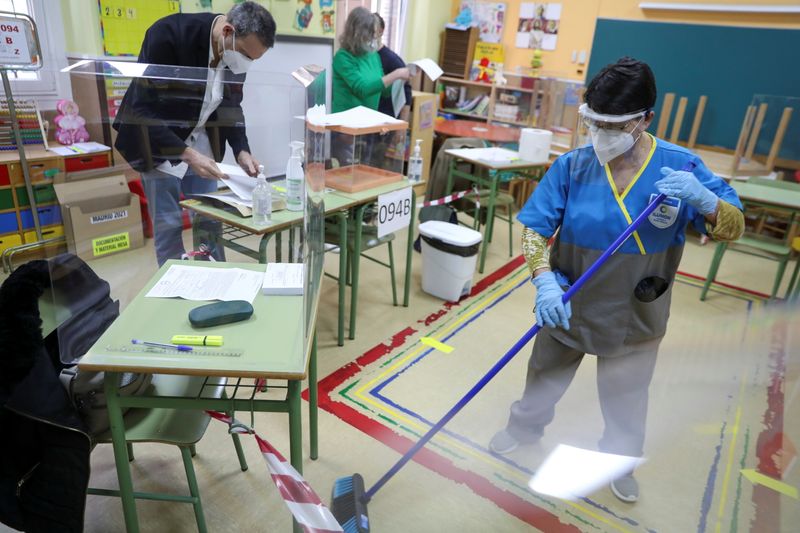 © Reuters. A worker wearing protective gear sweeps the floor of a polling station before the start of the Madrid’s Regional elections day, in Madrid, Spain, May 4, 2021. REUTERS/Susana Vera

By Elena Rodriguez and Cristina Galan

MADRID (Reuters) -Voters formed long queues at polling stations in Madrid on Tuesday to maintain social distancing in a regional election centred around unorthodox COVID-19 policies that could shake the nation’s political landscape.

The unusual mid-week vote in Spain’s wealthiest region is poised to return Isabel Diaz Ayuso, from the conservative Popular Party (PP), to power as regional leader, according to opinion polls.

Ayuso, 42, has won the support of many Madrid residents by defying Spain’s left-wing government and refusing to close down bars and restaurants to curb the coronavirus pandemic.

She prioritised the economy and social life, pleasing many bar and restaurant owners – as well as madrilenos who are famous for their lively nightlife.

An emphatic victory for PP and the wider right in Madrid could alter the balance of power nationally, beginning a new electoral cycle with a restructured right side in which the PP can only get a majority with the help of the far-right Vox party.

“I am feeling so happy,” Ayuso told reporters after casting her vote. “Today is the best day, it’s democracy day.”

Polling stations are open until 8 p.m. (1800 GMT), and more than 5 million people are entitled to vote, with the last hour reserved for COVID-19 positives and suspected cases. National broadcaster TVE will release exit polls when stations close. Final results are expected before midnight.

“(The elections) are very strange, I think it’s weird for us all, the masks, voting on a weekday, and also all the social polarisation. We all have our attention on the election,” said IT consultant Borja Lava, 37.

The Madrid region, home to some seven million of Spain’s 47 million people, recorded 369 COVID-19 cases per 100,000 in the last 14 days on Monday against a national average of 223. Occupancy of intensive care units is also the highest in Spain, at about 44.7%.

The PP is projected to win over 40% of the vote, potentially doubling its seats in the assembly from 2019’s election, but Ayuso may need the help of the Vox party to govern.

“Legal fascism – national shame!” read a slogan painted on one protester’s body. They were removed by police.

Surveys suggest the centre-right Ciudadanos party, which has in the past teamed up with the PP to form regional governments, faces the prospect of winning no seats and disappearing from the political landscape.

The Spanish Socialist Workers’ Party of Prime Minister Pedro Sanchez would see its seats halved in the 136-seat assembly, and the broader left is poised to secure just 64 seats.