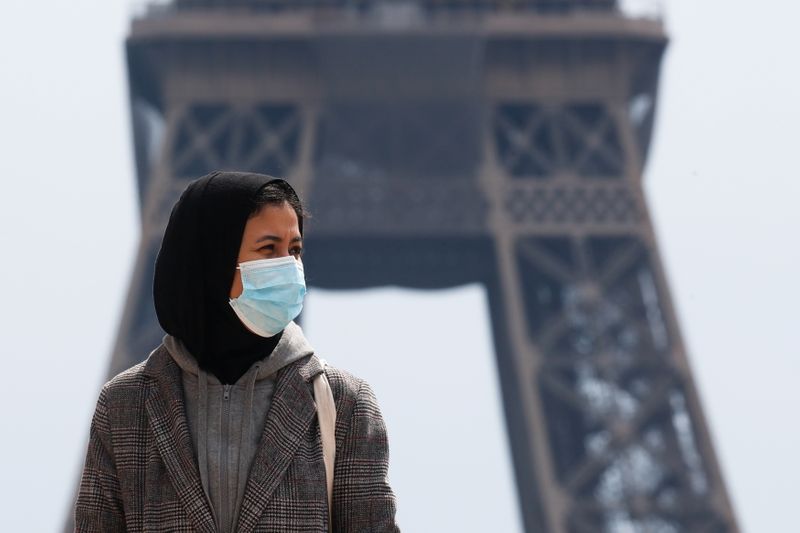 © Reuters. A woman, wearing a hijab and a protective face mask, walks at Trocadero square near the Eiffel Tower in Paris, France, May 2, 2021. Picture taken on May 2, 2021. REUTERS/Gonzalo Fuentes

STRASBOURG, France (Reuters) – Sixteen year-old Mariem Chourak is a devout Muslim who considers wearing a hijab an expression of her devotion to the Prophet Mohammad, but a proposal by French senators might soon deny her the freedom to do so in public spaces.

The amendment to an ‘anti-separatism’ bill designed to strengthen France’s secular values and which applies to girls under 18 has drawn outrage and prompted an online protest under the hashtag #HandsOffMyHijab (#PasToucheAMonHijab) that went viral beyond French borders.

“It’s part of my identity. To force me to remove it would be a humiliation,” Chourak said. “I cannot understand why they would want to pass a law that discriminates.”

The place of religion and religious symbols worn in public is a long-running matter of controversy in France, a staunchly secular country and home to Europe’s largest Muslim minority.

France prohibited the wearing of Islamic headscarves in state schools in 2004. In 2010, it banned the niqab, the full-face Islamic veil, in public places such as streets, parks, public transport, and administrative buildings.

The amendment pertains to all religious symbols, though opponents say it targets Muslims. Senator Christian Bilhac told lawmakers in April it would protect youngsters.

“Parents should not impose dogma on their children,” he told the upper house.

A group of young women is running the #PasToucheAMonHijab campaign from the living rooms of their families’ flats.

They have drawn support from social media influencers, a U.S. lawmaker and Ibtihaj Muhammad, the first American woman to wear a hijab while competing in the Olympics, among others.

“(The politicians) want our emancipation, they want to save us from this imaginary oppression, but it is they who are oppressing us,” said medical student Mona el Mashouly, 25, in her home city of Strasbourg.

President Emmanuel Macron warns that Islamism is undermining the unity of the Republic.

His government’s anti-separatism bill cracks down on forced marriages and virginity tests, and includes stricter surveillance of religious associations. It initially made no mention of preventing minors from wearing the hijab in public.

The conservative-dominated Senate added the amendment, as well as two more that would prevent mothers from wearing a hijab when accompanying children on school trips and ban the full-body burkini swimsuit.

A joint committee from parliament’s two chambers will debate the amendments and they may yet be scratched from the bill.

But for 22-year-old Hiba Latreche the damage is done.

“(It is) symptomatic of the constant policing of women’s bodies, choices and beliefs that we have in France,” she said, “as well as the instrumentalization of Muslim women.