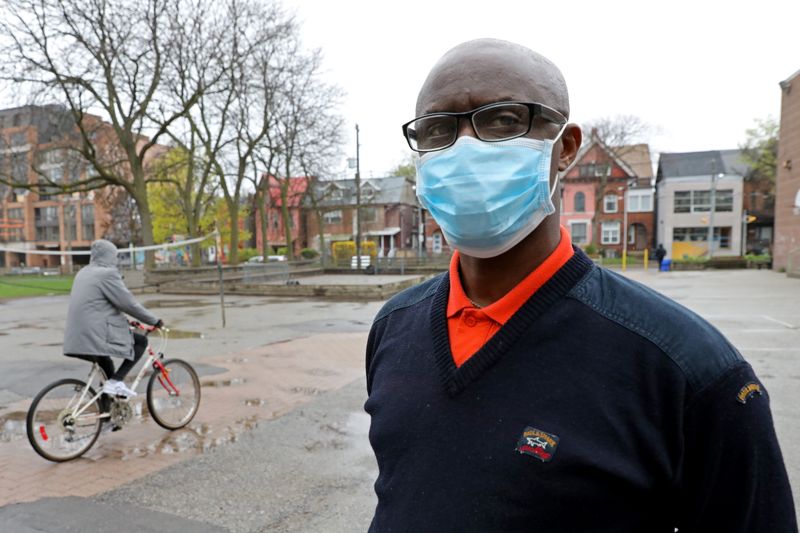 © Reuters. Apollinaire Nduwimana, a Burundian teacher and asylum-seeker who is awaiting a refugee application, poses outside a school near his lodging in Toronto, Ontario, Canada April 29, 2021. REUTERS/Chris Helgren

TORONTO (Reuters) – Canada’s pandemic-era policy of turning back asylum-seekers trying to enter between official border crossings is unlawful and violates their rights, a legal action filed on Tuesday alleges.

The Canadian Association of Refugee Lawyers filed the legal action in federal court claiming the policy is unlawful because it fails to consider the situation of asylum-seekers and whether they have reasonable alternatives available.

The policy also denies asylum-seekers their right to a hearing, according to a copy of the legal action seen by Reuters.

It is the first legal action against this policy since it was instituted in response to COVID-19 in March 2020.

Between March 21, 2020, and April 20, 2021, Canada turned back 387 asylum-seekers trying to cross between ports of entry, according to the Canada Border Services Agency.

Even though Canada said they could return at a later date to make refugee claims, the legal action argues Canada is not ensuring that the turning away of refugees is temporary.

Canada has previously said the turn-back policy, which it has been renewing monthly, is a necessary public health measure. Canada also says it has assurances from the United States that “most” asylum-seekers will be returned to Canada to pursue refugee claims.

But the United States deported at least one asylum-seeker turned back under this policy, according to the man’s lawyer and correspondence seen by Reuters. Others were held in a detention centre.

Canada’s Public Safety Minister could not immediately be reached for comment.

Burundian Apollinaire Nduwimana tried to cross into Canada in October at Roxham Road, which has become a common destination for asylum-seekers skirting the Safe Third Country Agreement (STCA).

Under the STCA, asylum-seekers crossing at a formal port of entry along the Canada-U.S. border are turned around and are often held in U.S. immigration detention. Last month, the Federal Court of Appeal upheld the contested agreement after a lower court ruled the pact violated asylum-seekers’ fundamental rights under the Canadian Charter of Rights and Freedoms.

According to his lawyers, U.S. authorities tried multiple times to deport him to Burundi, to which Canada has deferred deportations for reasons of humanitarian crisis.

Nduwimana is not directly affected by this legal action. But his case demonstrates the potential repercussions of this policy, lawyers say.

He was allowed to enter Canada under an exemption to the turn-back policy after being detained for five months. He has now filed a refugee claim.

He was one of nine turned-back asylum-seekers granted a national interest exemption letter by Immigration, Refugees and Citizenship Minister Marco Mendicino. According to the government, seven have come to Canada.