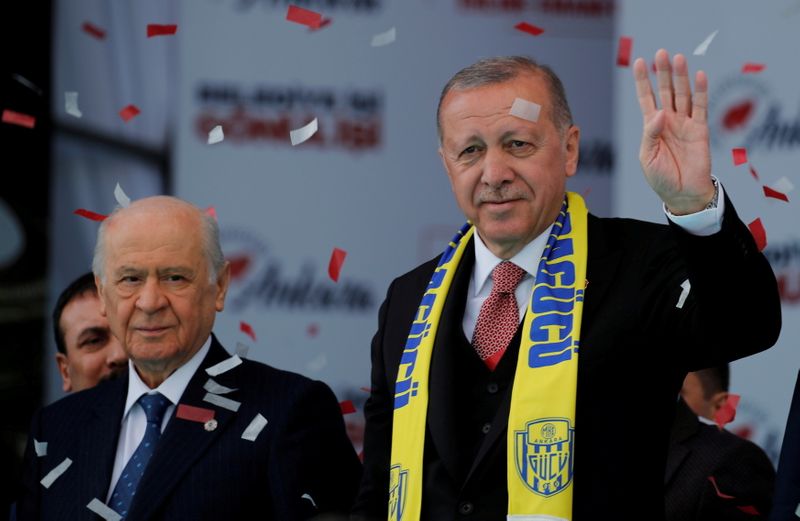 
ANKARA (Reuters) – President Tayyip Erdogan’s nationalist ally said on Tuesday that his party had drafted a new constitution for Turkey that envisages an overhaul of the judiciary, and that it would soon be presented to Erdogan’s ruling AK Party (AKP) for discussion.

Erdogan has said he hopes a new constitutional text can be ready by 2022 for public debate, as the country prepares to mark the centenary of the creation of the modern Turkish republic in 2023 from the ashes of the Ottoman Empire.

The Islamist-rooted AKP has spoken of drawing up a road-map to a new constitution but has not yet announced any details.

“This constitutional proposal is the democratic torch of the 100 years that lies ahead, a move by our people to build and reclaim the future,” said Devlet Bahceli, leader of the Nationalist Movement Party (MHP), of the new draft.

Turkish voters only approved in 2017 the current revised constitution which established an executive presidential system in place of a parliamentary democracy, against stiff dissent from opposition parties and human rights groups.

Erdogan was elected president under the new arrangements in 2018 but has made clear he wants further changes.

Bahceli said the MHP draft recommended setting up a new court to deal with some issues now handled by the constitutional court, including shutting political parties. Parliament’s power to select members of the judiciary would be expanded.

He said the draft aimed to update the “understanding of basic rights and freedoms”, without elaborating.

Bahceli and his MHP have previously called for the banning of the main pro-Kurdish party which they see as endangering national unity.

The AKP and its MHP allies together have a parliamentary majority but their numbers are not enough to call for a referendum.

Turkey’s existing constitution was adopted in 1982 following a military coup and has been amended many times over the years.

Rights groups and Turkey’s Western allies have criticised what they see as increasing authoritarianism under Erdogan, especially since a 2016 coup attempt that prompted sweeping crackdowns on his perceived opponents in the civil service, education, the military and elsewhere.

Turkish authorities say the measures were necessary for national security.