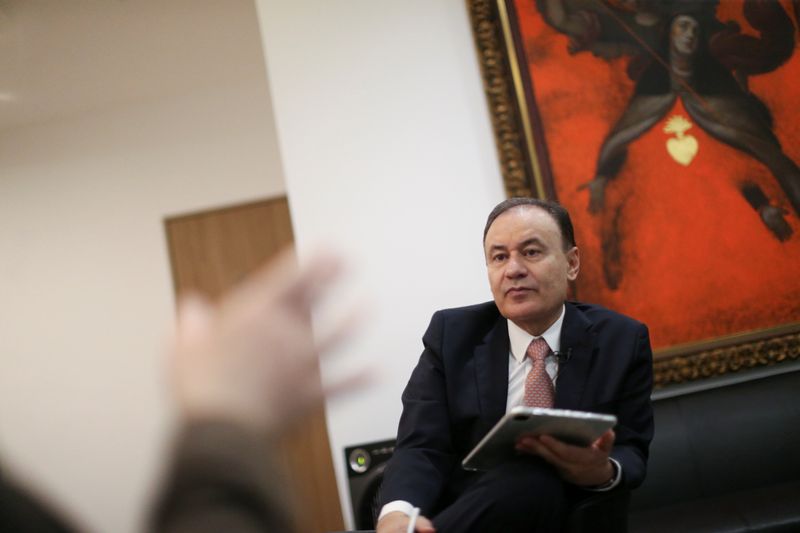 © Reuters. Alfonso Durazo, former security minister and candidate for governor in Sonora, is pictured during an interview with Reuters in Mexico City, Mexico April 22, 2021. REUTERS/Edgard Garrido

Now, a contrasting, friendlier message to business is emerging from officials and candidates from the ruling National Regeneration Movement (MORENA) looking toward the rest of his term, eager to show they can deliver jobs and growth.

“I will give priority to investment wherever it comes from,” said Alfonso Durazo, Lopez Obrador’s former security minister, who is pitching a raft of projects to revitalize the northern state of Sonora if elected governor for MORENA in the June 6 vote.

Mexicans have so far backed Lopez Obrador on his disruptive drive to renegotiate or cancel billions of dollars in contracts that he argues were the product of entrenched corruption between big business and politicians conspiring to bilk taxpayers.

Opinion polls suggest MORENA and its allies will dominate the national, state and municipal elections, winning the bulk of 15 governorships up for grabs, and could get close to a two-thirds majority in the lower house of Congress.

But that support partly reflects discontent with older parties, and officials, lawmakers and voters say MORENA must improve its economic record to stay on top in the long term.

MORENA gubernatorial candidates for states including Baja California and Sinaloa in the north and Tlaxcala in the center, as well as mayoral hopefuls in and around Mexico’s second city Guadalajara, have all made overtures to investors.

And Finance Minister Arturo Herrera has been particularly insistent on the need to promote investment.

Gabriela Cuevas, a MORENA federal congresswoman, said the party had always made clear it would shake up the system, but now needed to explain how the new rules would work for business.

So far it had pursued “more of a strategy of deconstruction, rather than constructing a new economic policy,” she said.

In Sonora, while voters are broadly supportive of MORENA, many also cite concerns about the economy, alongside gang violence and a soaring pandemic death toll.

“There’s not enough work in Mexico. What we have to fight for is jobs, so we don’t need to migrate to the United States,” said Julian Fernandez, a 51-year-old laborer in Sonora’s capital Hermosillo, who voted for Lopez Obrador as president but is now leaning towards Durazo’s main gubernatorial rival.

Lopez Obrador took office in December 2018 promising to reduce crime and increase economic growth. Instead, the next two years saw more homicides than ever before, and Mexico’s economy was shrinking even before the pandemic hit.

The economy contracted 8.5% in 2020, though it is now clawing back ground, lifted by U.S. demand. However, the latest official gross fixed capital investment figures are still down about 20% from when Lopez Obrador won election in July 2018.

Corporate lobbies, rating agencies and some of Mexico’s main diplomatic allies have all said uncertainty stemming from his shake-up of the business landscape has hurt investment.

Lopez Obrador has mitigated the economic turbulence with popular welfare schemes, and used his daily 7 a.m. news conferences to keep the opposition on the back foot, pillorying them as stooges of greedy plutocrats.

“The people are tired of being ripped off time and again,” said Alvaro Urquijo, a Durazo supporter in Hermosillo, using a phrase popularized by the president.

Urquijo, a 42-year-old lawyer, argued MORENA deserved more time to turn Mexico around. But he stressed he was not wedded to the party, having voted for Lopez Obrador’s adversaries before.

Durazo, the frontrunner to win in Sonora, promises to make the most of his relationship with Lopez Obrador.

“The governor has never had the room for maneuver that I will have,” he told Reuters in an interview.

Aided by private investment, Durazo wants to turn Sonora’s main port Guaymas into a major entrepot, make one of its airports a regional hub, overhaul the road network, and establish the state as a stronghold of tourism.

He also wants outside capital to help boost solar power generation in the hot, arid state, although renewable energy has been disincentivized by the president in his battles with private power providers he has likened to colonial invaders.

Not everyone is confident Durazo will have his way.

“Nobody’s going to be able to twist the president’s arm,” said Kurt Gerhard, head of employers’ federation Coparmex in Hermosillo.

But many local executives are quietly betting on Durazo, believing he will get more out of Lopez Obrador than an opposition governor, said another business leader, speaking on condition of anonymity.

Lopez Obrador, who by law can only serve one term, has framed the election as a referendum on his welfare spending, saying the opposition wants to capture the lower house of Congress so it can cancel the programs and pocket the money.

Jose Adan Armenta, a 64-year-old accountant in Hermosillo, said all seven of his siblings were backing MORENA for fear that they would otherwise “lose their pensions.”

Armenta will not be joining them, expressing alarm about steps Lopez Obrador has taken that concentrate presidential power, and seeing him as a liability for the economy.

But Lopez Obrador would likely continue his strategy of confrontation, he argued.