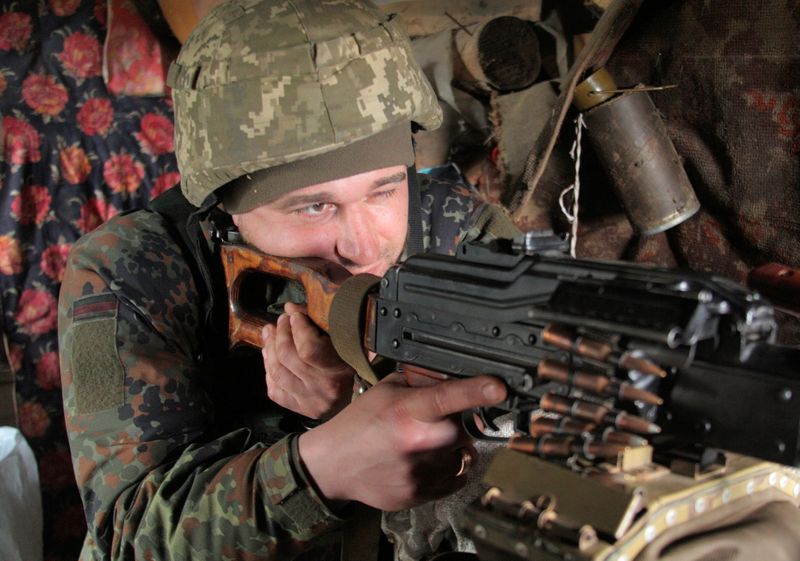 © Reuters. FILE PHOTO: A service member of the Ukrainian armed forces points a weapon at fighting positions on the line of separation near the rebel-controlled city of Donetsk


MOSCOW (Reuters) -Russia accused a Ukrainian diplomat on Saturday of trying to obtain classified information and ordered him to leave the country by April 22, in the latest flare-up of tensions between the two neighbours.

Russia’s FSB security service earlier said Oleksandr Sosoniuk was taken into custody when he tried to access the information from Russian law enforcement databases during a meeting with a Russian citizen.

“This activity is incompatible with the status of a diplomatic employee and is hostile to the Russian Federation. The foreign diplomat will be dealt with in accordance with international law,” the FSB said in a statement.

Ukraine’s foreign ministry, describing the arrest as a provocation, said Sosoniuk was held for several hours, before returning to the country’s consulate in St Petersburg.

Tensions between Moscow and Kyiv have been rising amid a build-up of Russian troops along the border and clashes in eastern Ukraine between the army and pro-Moscow separatists.

Russia’s foreign ministry said in a statement that Sosoniuk had been advised to leave Russian territory within 72 hours, starting from April 19.

“The Ukrainian side will soon decide how to respond to this provocation, taking into account current practice,” Ukraine’s foreign ministry said of Sosoniuk’s detention.