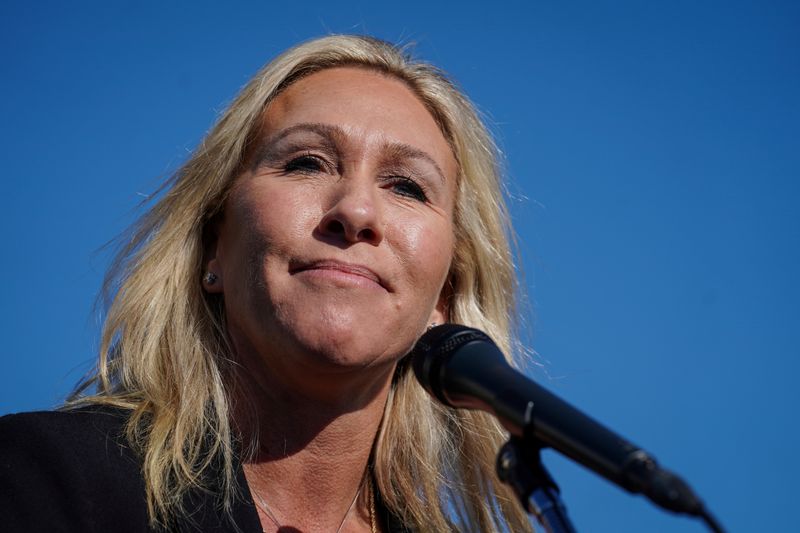 
WASHINGTON (Reuters) – A nascent effort by some conservative House of Representatives Republicans to form an “America First Caucus” to promote the policies of former President Donald Trump drew criticism on Friday for purported racial undertones in its founding document.

The effort is tied to first-term Representative Marjorie Taylor Greene and has a policy platform that promotes “a common respect for uniquely Anglo-Saxon political traditions” and advocates for infrastructure with aesthetic value that “befits the progeny of European architecture,” Punchbowl News reported on Friday.

Republican Representative Louie Gohmert told reporters he is considering joining the caucus, which he said aims “to get our own country in order, so it’s sustainable.”

Greene spokesman Nick Dyer dismissed the Punchbowl News report as “gossip” but said in a statement that the America First Caucus platform would be “announced to the public very soon.”

Congressional caucuses provide a forum for like-minded lawmakers to pursue common legislative objectives. Gohmert and Greene are also members of the House Freedom Caucus, one of the most conservative groups on Capitol Hill.

The document posted by Punchbowl drew condemnation from Democrats including Representative Peter Welch, who denounced it on Twitter as “nakedly racist and disgusting.” He added: “This supposed caucus and its members represent a dangerous nativist perspective that hurts our country, but sadly is not surprising.”

“It’s not returning to Anglo-Saxon tradition,” the Texas Republican said. “It’s not supposed to be about race at all. We’re stronger, you know, diversified. But there’s some things that helped make us strong.”

India’s daily COVID-19 deaths near 4,000 as WHO flags concern

India’s daily COVID-19 deaths near 4,000 as WHO flags concern

Microsoft quietly closing down Azure blockchain in September By Cointelegraph