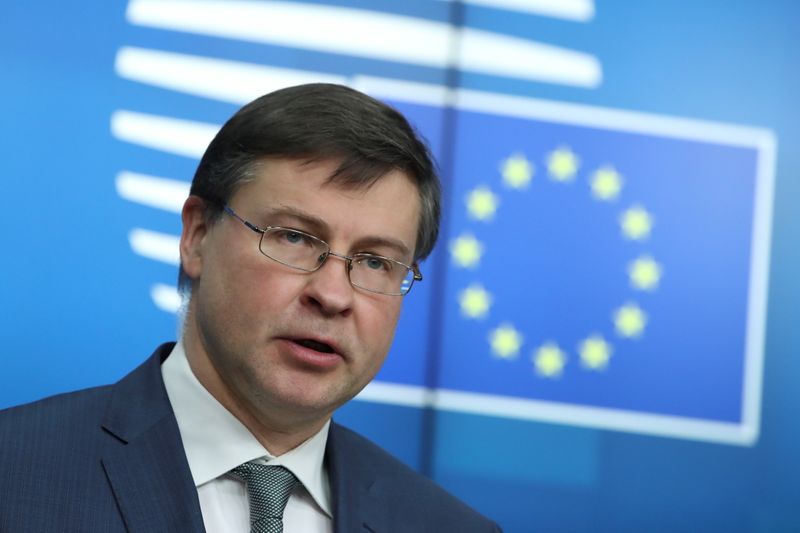 BRUSSELS (Reuters) – Some European Union governments will miss the April 30 deadline to submit their recovery plans to the European Commission, its Vice President Valdis Dombrovskis said on Friday, but they are still likely to submit the plans within a few weeks afterwards.

The delay in the submission of some of the national plans, which spell out how each government wants to spend its share of the EU’s 750 billion euro joint borrowing scheme, will not delay the scheme as a whole, Dombrovskis told a news conference.

“Some Member States are nearly there and submitting their plans by the end of April is achievable. For others, it looks more difficult. Finalisation will require somewhat more work for a couple of more weeks,” Dombrovskis said.

The 27 national plans are blueprints for spending grants and loans that each EU country will get from the unprecedented joint borrowing by the European Commission to rebuild economies greener and more digital after the COVID-19 pandemic.

To get the money, each country has to earmark 37% of the funds to reduce CO2 emissions and 20% to make the economy better prepared for the digital age through investment and reforms that will get piecemeal financing from the EU until 2026.

It is the long time horizon of the investments and reforms, as well as the need to allocate the prescribed percentage of the cash to certain areas, that is challenging for governments.

“For a vast majority of Member States, plans are in very advanced stages and are going to be submitted either by end of April or maybe a in a next couple of weeks after the end of April,” he said.

RATIFICATION MORE OF AN OBSTACLE THAN LATE PLANS

A few weeks slippage in the submission of some plans will not derail the whole programme because for any of the grants or cheap EU loans to flow to governments, 27 national parliaments need to first ratify their own increased budget guarantees for the overall EU budget. These commitments are the ultimate security for the borrowing, ensuring it will be repaid.

This is likely to take longer than the preparation of the spending plans — so far up to 17 countries have ratified the increased guarantees, called the Own Resources Decision, and others were expected to do so soon.

But the process is held up in several countries for various reasons. For example, in Germany the constitutional court is probing if it is in line with German law, in Poland the decision is subject to domestic political infighting and the Netherlands is struggling to form a ruling coalition after elections.

Yet without all 27 national ratifications, the Commission cannot start borrowing and no government can get any funds.

“If the Own Resources Decision ratification is completed in all Member States in June, and we are confident that this is going to be the case, then we can, as European Commission, go to the markets and do the borrowing and make first disbursements in July,” Dombrovskis said.

The amount that EU governments can get up-front this year, before any of the investments and reforms start, is 13% of their total share. Since most will want primarily the grants part of the funding, the total EU cash injection this year is likely to be around 44-45 billion euros.