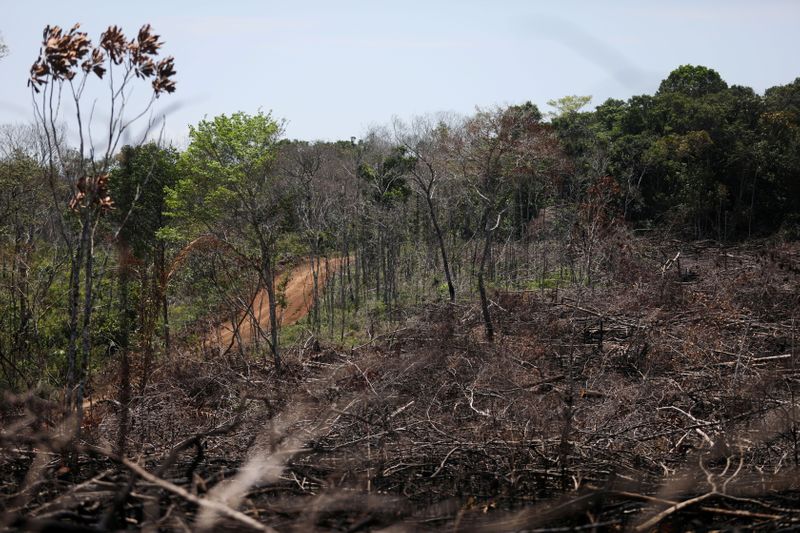 © Reuters. FILE PHOTO: View of a deforested area in the middle of the Yari plains, in Caqueta

SINGAPORE (Reuters) – Very little of today’s world resembles Planet Earth from 500 years ago. In fact, only about 3% of land surfaces might be ecologically intact — still home to their full range of native species and unblemished by human activity, according to new research.

The finding — published Thursday in the journal Frontiers in Forests and Global Change — is far lower than previous estimates based on satellite images, which suggested around 20% to 40% of land ecosystems were undamaged.

For the new study, however, scientists conducted an extensive survey of forest cover and species losses to understand better what was happening beneath the world’s tree canopies.

“I was particularly surprised to see how low it really is,” said Andrew Plumptre, a conservation biologist at the University of Cambridge. “It shows how rare such intact places are. It’s scary just how little the world looks like what it was just 500 years ago.”

The term ecosystem describes the complex relationships within a natural area that, altogether, help to sustain a healthy and balanced diversity of life. Lose just one or two key species, and the whole system could fall apart.

Today’s still-pristine habitats, containing the same species abundance as in the year 1500 A.D., were mostly found in regions considered less hospitable for humans, including the Sahara Desert and chilly regions of Greenland and northern Canada.

Other intact habitats were in areas under extreme pressure from deforestation and development, including parts of the Amazon (NASDAQ:) in Latin America.

The authors argue that these areas should be a priority for future conservation. Though currently, only 11% of these areas are under protection, the study found.

“The idea of focusing on intact areas is so that you don’t have to work to remove the human footprint,” Plumptre said.

Some scientists, however, questioned the extremely low figure, saying it could be attributed to the study using a particularly narrow definition of “intact habitats” — those with their full, historical collection of animals and plants.

He also questioned the study authors’ call for protecting still-intact areas, noting frozen or desert patches are not the most abundant with species. “Encouraging nations to protect remote, sparsely populated areas won’t do biodiversity a lot of good,” Pimm said.

An effort led by the United Nations to protect 30% of the planet’s land and waters by 2030 – up from about 17% currently under some form of protection – has gained momentum over the last year, as governments including the United States have pledged to commit more land to conservation.

Some conservationists argue, however, that the world’s conservation goal should be much higher than 30% in order to prevent mass die-offs of species. A 2019 U.N. report estimated as many as 1 million species are under threat of extinction due to human activity.

“30 by 30 is a nice catchphrase, but it won’t do much good if the areas to be protected are not selected carefully,” Pimm said.