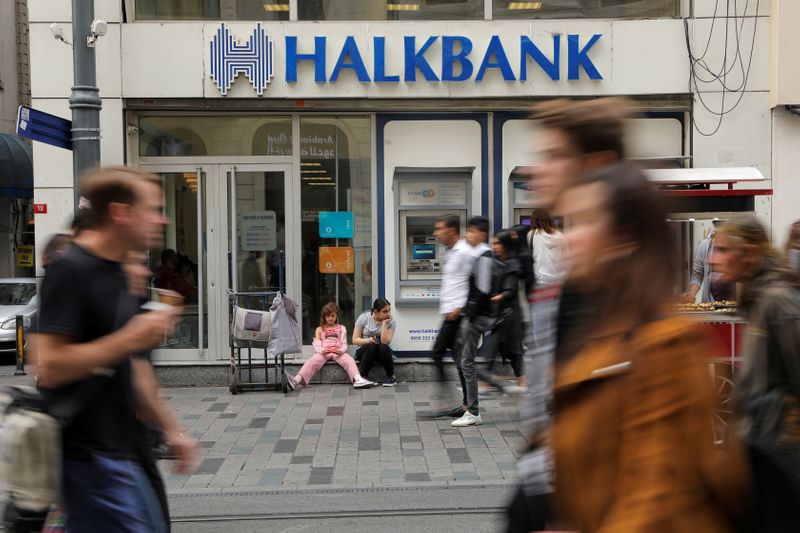 © Reuters. FILE PHOTO: People walk by a branch of Halkbank in Istanbul

NEW YORK (Reuters) – A lawyer for Halkbank told a U.S. appeals court on Monday that the state-owned Turkish lender was immune from U.S. prosecution and that an indictment accusing it of helping Iran evade American sanctions should be thrown out.

In arguments before the 2nd U.S. Circuit Court of Appeals in Manhattan, Halkbank’s lawyer Simon Latcovich said the U.S. government had no basis to assert criminal jurisdiction over the bank, and that the bank was “synonymous” with Turkey for purposes of immunity.

Halkbank has pleaded not guilty to bank fraud, money laundering and conspiracy charges over its alleged use of money servicers and front companies in Iran, Turkey and the United Arab Emirates to evade sanctions.

Prosecutors accused the bank of converting oil revenue into gold and then cash to benefit Iranian interests, and documenting fake food shipments to justify transfers of oil proceeds.

Latcovich argued on Monday that the bank was immune from prosecution under the federal Foreign Sovereign Immunities Act.

But U.S. prosecutor Sidhardha Kamaraju said that act applies only to civil cases, and urged the appeals court to reject what he called a “dramatic extension” of sovereign immunity.

The appeals court did not say when it will rule.

Ethereum has a “chance to blow up,” billionaire Mark Cuban By BTC Peers

Airbus and Air France ordered to stand trial over 2009 crash