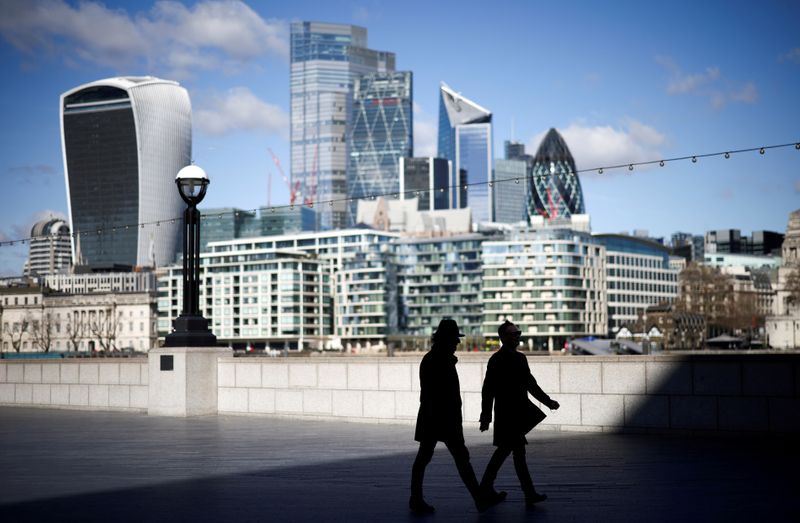 © Reuters. FILE PHOTO: The City of London financial district can be seen as people walk along the south side of the River Thames, amid the coronavirus disease (COVID-19) outbreak in London


LONDON (Reuters) – Confidence among big businesses in Britain about their profits in the year ahead has hit a record high, helped by the country’s coronavirus vaccinations and hopes for less Brexit disruption, a survey of chief finance officers showed.

After the biggest hit to Britain’s economy in more than three centuries last year, accountancy firm Deloitte said its poll found CFOs were planning to increase hiring and investment.

Most workers were expected to return to their offices between July and September after working from home for much of the past year.

Almost 10% of CFOs had experienced significant or severe disruption due to Brexit but only 3% expected that level of disruption to persist in a year’s time, Deloitte said on Monday.

“Brexit has been a significant dampener on business activity in the last four years but with the UK’s final departure from the EU, such effects are fading,” Ian Stewart, Deloitte’s chief economist, said, noting most CFOs still thought Britain’s departure from the European Union would hurt their businesses.

“Combined with a successful vaccine rollout and a greatly improved global backdrop, we are seeing a turbo-charged surge in business optimism.”

Britain’s economy shrank by nearly 10% in 2020 as the country was hit by Europe’s highest COVID-19 death toll. But it is expected to start recovering soon as the government lifts its social-distancing rules.

The only category of macroeconomic risk where concerns had risen sharply related to inflation and asset price bubbles, Deloitte said.

A separate survey suggested Brexit and COVID-related problems were continuing for exporters.

The British Chambers of Commerce said 41% of firms reported lower sales in the first three months of 2021, up from an already-high 38% in the previous quarter, led by firms in sectors hardest hit by lockdowns – hospitality, catering, retail and wholesaling.

A third survey showed small firms in Britain were their most confident in more than six years, but one in seven was likely to make some or all employees redundant this quarter.

“Bringing down the non-wage costs of employment, starting with employer national insurance contributions which essentially serve as a jobs tax, would certainly help,” Cherry said.

The Deloitte survey was conducted between March 17 and March 30 and polled 100 CFOs from companies with a combined market value of 547 billion pounds ($751 billion) among UK-listed firms.

What you need to know about the coronavirus right now