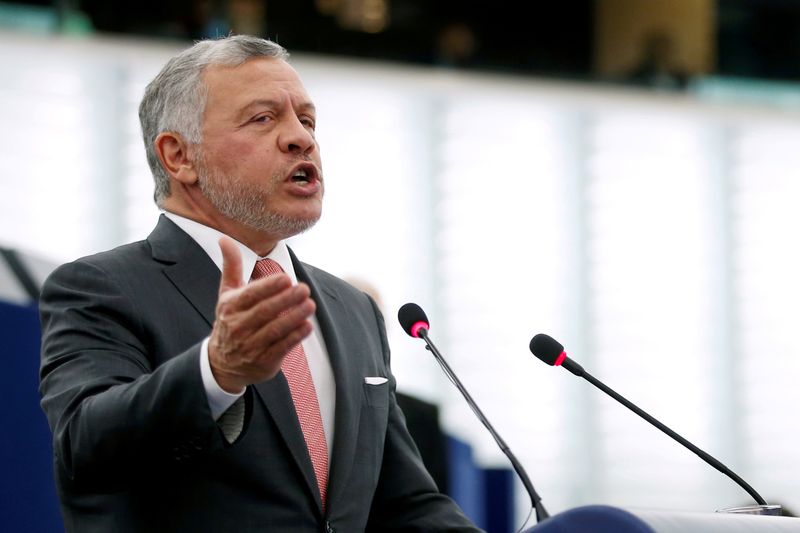 AMMAN (Reuters) -When Prince Hamza visited the relatives of COVID-19 patients who died after a hospital ran out of oxygen, he triggered a rift in Jordan’s monarchy that has shaken the country’s reputation as a stable country in a volatile region.

The March 14 visit to the city of Salt was, in the words of a senior establishment figure, the “straw that broke the camel’s back”, coming as it did hours after King Abdullah had visited the hospital and publicly scolded management for the nine deaths.

Hamza made the trip to console the bereaved six days before Prince Hussein went to the city to do the same, a move that some officials said had upstaged his younger rival for the throne.

Reuters spoke to more than a dozen officials, former officials and palace insiders about the events leading to the accusations against Hamza. They spoke on condition of anonymity in order to be able to discuss sensitive issues.

Eight people familiar with the situation said that Hamza’s visit had undermined his half-brother the king, and prompted authorities to place him under house arrest and accuse him of involvement in activities aimed at destabilising the country.

While Hamza and Abdullah have publicly buried the hatchet, the dramatic events of the weekend exposed faultlines within a royal family that has helped shield Jordan from the turmoil that consumed neighbouring Syria and Iraq.

Hamza was widely expected to have succeeded Abdullah as Jordan’s next king, until the monarch made Prince Hussein his heir instead in 2004, in line with family tradition.

Some experts worry that the feud could re-ignite, given underlying problems in Jordan like poverty, joblessness and rising COVID-19 deaths which they said contributed to tensions spilling into the open.

“The family feud is over, yet we have to address the issues that prompted it … unemployment, COVID-19 management and poverty,” Jawad al Anani, who served as the last royal court chief under the late King Hussein, told Reuters.

“These are the causes (of) … the frustration that pushes people to follow their own idols.”

Hamza could not be reached for comment on the causes of the palace rift and his motives for visiting the bereaved families.

The palace declined to comment, when asked what had prompted the government to move against Hamza, who has not been seen in public since the feud erupted.

On Wednesday, King Jordan said sedition had been quashed and Hamza was “under my care”. Hamza pledged allegiance to the king after mediation by the royal family.

Officials said between 14 and 16 people had been arrested in connection with the alleged plot.

Hamza, 41, was warmly welcomed by families of the deceased in Salt during his visit in March.

Small protests over the hospital’s oxygen shortages had broken out across Jordan, and some participants were chanting the prince’s name and calling on him to save the country.

The hospital could not be reached for comment early on Friday, which is a weekend in Jordan.

The monarch, 59, has been pushing his 26-year-old son Hussein increasingly into the spotlight, has been seen at his side on most public occasions and often accompanies him on foreign visits.

Hamza’s activities were a concern to the king long before events came to a head last month, according to some prominent politicians.

The prince, son of the late King Hussein and Queen Noor, has nurtured close ties with Jordan’s tribes, who dominate the security forces and form the bedrock of support for the kingdom’s Hashemite monarchy.

This year he stepped up his trips to rural and provincial areas to meet disgruntled tribal leaders who formed a loose opposition movement called Herak, many of whose members are army and security retirees.

On social media he appeared sitting in Bedouin tents sipping tea and conversing with elders who were critical of the king for failing to provide them with enough jobs or financial security.

Although Hamza rarely voiced his opinion publicly, the palace saw the prince’s outreach as a bid to undermine King Abdullah and his son’s growing profile as a champion of equal opportunity for the country’s youth, several sources familiar with palace thinking said.

It also flouted rules that require any royal to inform the palace of visits to public places, three palace officials added.

Security forces had been following Hamza’s every step and informing the monarch more regularly about his activities at a time of rising public discontent over record unemployment and poverty, according to three people familiar with the situation.

When asked about the monitoring, a security official said it was the job of intelligence agencies to protect the country’s safety.

Over the last decade, anger with the authorities over worsening living standards and alleged corruption has triggered major civil unrest in Jordan, mainly in the provincial and Bedouin areas where Hamza has reached out to local leaders.

Tribal member Abdullah Huwaitat recalled a visit earlier this year by the prince to a gathering in southern Jordan where Hamza told them his father, who had a strong affinity with tribes, would never have allowed conditions to deteriorate as they had done in Jordan.

Two attendees said Hamza expressed sympathy for their views that the country was being poorly managed. Reuters could not independently confirm their account.

Over the last 20 years, Hamza cultivated loyalty by emulating his father’s language, voice, behaviour and even attire. Tribal sources said the well-mannered, Western-educated prince made a point of learning the dialects of every tribe.

As his popularity appeared to grow, authorities felt the time had finally come to step in.

“He left us with no option,” said one senior political figure.

Army chief of staff Yousef Huneiti arrived at Hamza’s palace in Amman at around 2:00 p.m. on Saturday.

Hamza was told that mixing with disaffected tribes was a “red line” that he should not have crossed.

In an audio recording leaked by Hamza on social media, the prince reacted angrily: “Sir, forgive me, where were you 20 years ago? I was the Crown Prince in this country by order from my father, may Allah have mercy on him.

“I made an oath to him that I would continue to serve my country and people so long as I am alive.”

An army spokesman was not immediately available for comment on the episode.

Prince Hamza also said in a video recording passed by his lawyer to the BBC that he was under house arrest and had been told to stay at home and not contact anyone.

Speaking in English in the video, he said he was not part of any foreign conspiracy and denounced the ruling system as corrupt.

“(Jordanians’) wellbeing has been put second by a ruling system that has decided that its personal interests, financial interests, that its corruption is more important than the lives and dignity and future of the ten million people who live here,” he said.

TIME Magazine to invest in Bitcoin By BTC Peers