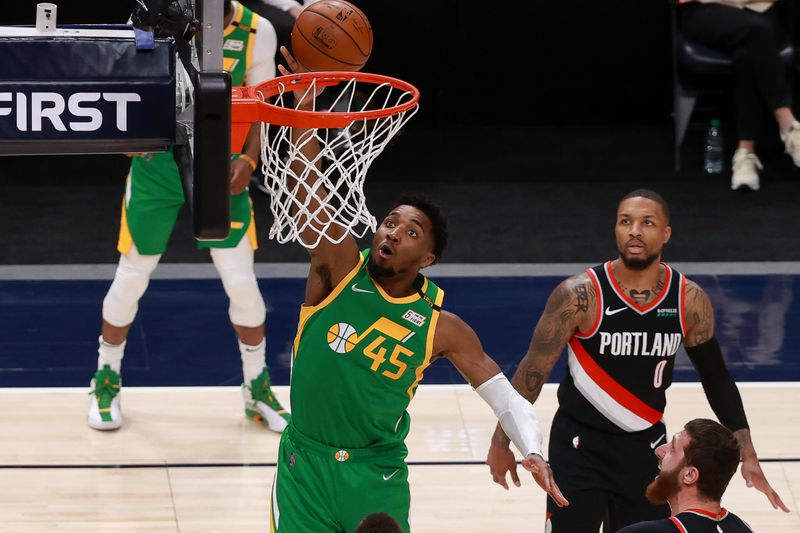 Donovan Mitchell scored 37 points and Rudy Gobert contributed 18 points and 20 rebounds to lift the Utah Jazz to a big 122-103 win over the Portland Trail Blazers on Thursday night in Salt Lake City.

Utah snapped a two-game losing streak — the NBA-leading Jazz had stumbled on the road at Dallas and Phoenix — and secured its 23rd consecutive home victory.

Four other Jazz players scored in double figures — Joe Ingles (13), Mike Conley and Bojan Bogdanovic (11), and Georges Niang (10) — as Utah bounced back 24 hours after a tough overtime loss to the Suns.

Damian Lillard topped Portland with 23 points and CJ McCollum scored 19, but the Blazers fell for the third time in four games.

Kristaps Porzingis added 26 points and 17 rebounds, and Josh Richardson scored 14 points for the Mavericks. The Bucks played without two-time reigning MVP Giannis Antetokounmpo (knee) for the third straight game and the fifth time in the past 10 contests.

Donte DiVincenzo made a career best six 3-pointers and scored 22 points to lead the Bucks, who have lost two straight games and five of their past eight. Bobby Portis recorded 20 points and a season-high 14 rebounds, and Brook Lopez added 16 points.

Isaiah Stewart recorded 16 points and a game-high 13 rebounds for Detroit, which has alternated losses and wins over the past eight games. Sacramento took its fifth straight loss despite getting 23 points, nine rebounds and seven assists from De’Aaron Fox.

Detroit capitalized on a poor shooting night from the Kings, who finished 7 of 30 (23.3 percent) from beyond the 3-point arc. The Pistons built a big first-half lead that gave them a cushion down the stretch.

Miami also got 18 points from Victor Oladipo, who grabbed his right knee after a dunk with 5:35 left in the game. He immediately went to the locker room and did not return.

Kentavious Caldwell-Pope led the Lakers with a season-high 28 points. Andre Drummond returned for the Lakers and notched 15 points and 12 rebounds after missing the past three games with a toe injury.

Los Angeles ran its home record to 20-8 this season, pushing past Phoenix in a battle of the second- and third-place teams in the Western Conference standings.

Paul George led the Clippers with 33 points on 12-of-19 shooting, including 7-of-9 success from 3-point range. Kawhi Leonard scored 14 of his 27 points in the third quarter for the Clippers, who saw Patrick Beverley and Marcus Morris Sr. get ejected in the fourth quarter.

The Bulls clinched the three-game season series despite a huge game from the Raptors’ Chris Boucher, who set career highs with 38 points and 19 rebounds. Pascal Siakam had 27 points for Toronto, which played without injured starters Kyle Lowry and Fred VanVleet.

The Cavaliers have won consecutive games for the first time since a four-game winning streak that ended March 1. Taurean Prince added 22 points off the bench for the Cavaliers, while Darius Garland finished with 21 points and five assists.

Ty Jerome led the Thunder with a career-high 23 points, going 9 of 16 from the field with five 3-pointers. Theo Maledon had 14 points but was just 6 of 17 from the floor.

Mets-Phillies postponed due to rain; will play doubleheader Tuesday By Reuters