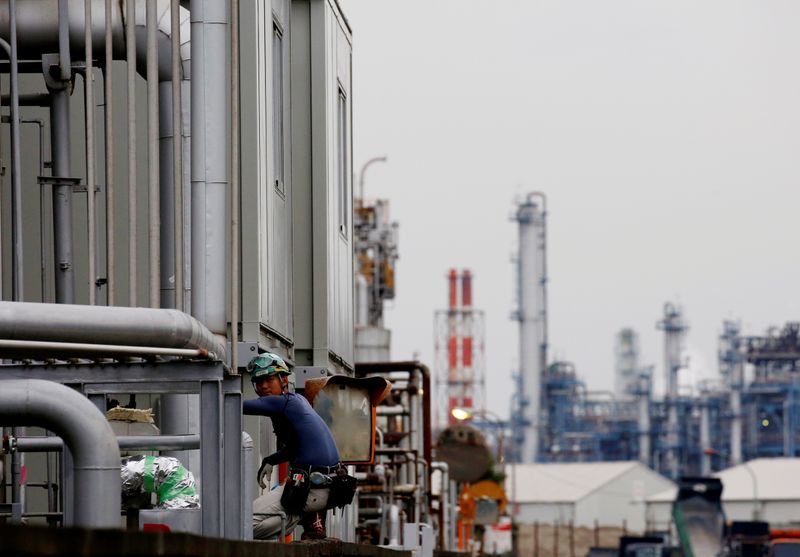 © Reuters. A worker is seen in front of facilities and chimneys of factories at the Keihin Industrial Zone in Kawasaki


TOKYO (Reuters) – Japan’s core machinery orders are expected to have recovered in February from the previous month’s drop, a Reuters poll of economists showed, as firms shored up capital spending despite the lingering impact on business of the coronavirus crisis.

Core machinery orders – a highly volatile data series seen as an indicator of capital spending six to nine months ahead – are forecast to rise 2.8% in February from the previous month after a 4.5% fall in January, the poll of 18 economists showed.

The core orders, which exclude those for ships and electric utilities, likely grew 2.3% in February from a year earlier.

“Manufacturers’ capital spending is on the uptick, helped by exports’ recovery,” said Takumi Tsunoda, senior economist at Shinkin Central Bank Research. “But non-manufacturers remained cautious about spending on worries about the spread of the coronavirus infection.”

Policymakers are hoping corporate expenditure can help revive the world’s third-biggest economy, even though analysts expect it shrank again in the first quarter due to emergency steps to curb the coronavirus pandemic.

The Bank of Japan’s latest quarterly survey showed that big firms expect to boost capital expenditure by 3.0% in the year that began in April, more than market forecasts for a 1.4% gain.

The government will announce core orders data at 8:50 a.m. Japan time on Wednesday (2350 GMT on Tuesday).

Next week’s data also include the BOJ’s corporate goods price index (CGPI), which measures the prices companies charge each other for goods and services.

The index likely rose 0.5% in March from a year earlier, up for the first time since February 2020, led by price gains in oil-related products, the poll found.

UK holding off on Liberty Steel as Gupta explores refinancing: minister By Reuters