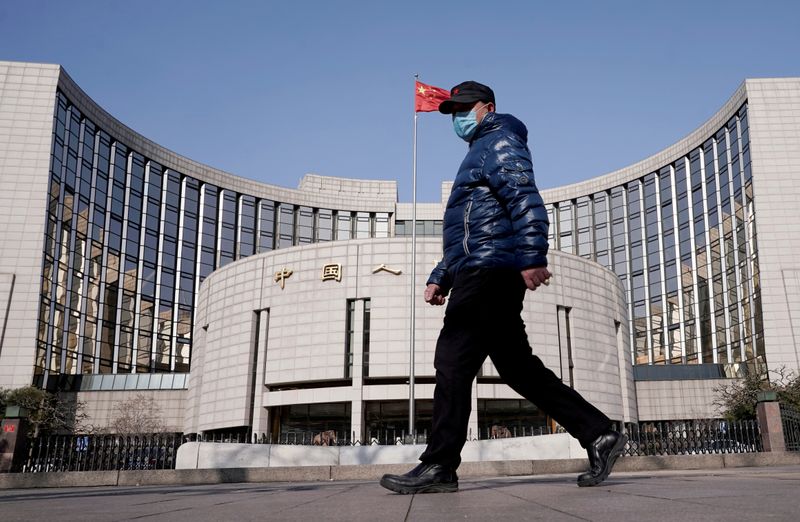 © Reuters. FILE PHOTO: Man wearing a mask walks past the headquarters of the People’s Bank of China, the central bank, in Beijing


BEIJING (Reuters) – New bank loans in China are expected to have rebounded in March from a sharp drop in February, a Reuters poll showed, as the central bank walks a tightrope between supporting the recovering economy and containing debt risks.

Chinese banks are estimated to have issued 2.45 trillion yuan ($373.96 billion) in net new yuan loans last month, up from 1.36 trillion yuan in February, according to the median estimate in the survey of 25 economists.

But that would be a 14% fall from the 2.85 trillion yuan issued the same month a year earlier, when tough measures to contain the coronavirus pandemic paralyzed much of the economy.

After record growth in credit in January, new lending dropped sharply in February. Still, if the March reading meets forecasts, total lending in the first quarter would reach a record high of 7.39 trillion yuan.

Credit trends are being closely watched by investors who are increasingly worried about policy tightening as Beijing looks to exit from emergency pandemic policies now that the world’s second-largest economy is quickly regaining momentum. The country’s blue-chip share index fell over 5% in March, its worst monthly performance in a year.

China’s central bank has pledged to stabilise the country’s overall debt level which jumped last year due to stimulus measures, but has said it will avoid a sudden policy shift and will continue to support ailing small firms.

Last year, the central bank rolled out a raft of measures including cuts in interest rates and reserve ratios to support the economy. But it has kept the benchmark lending rate, the loan prime rate, unchanged since May.

China set a modest annual economic growth target of above 6%, as policymakers plan a careful course out of a year disrupted by COVID-19.

The economy is expected to grow more than 8% in 2021, analysts have said, adding that the rebound would be from a low 2.3% base in 2020 and that the recovery remains uneven.

The data is expected to be released between April 12-19.