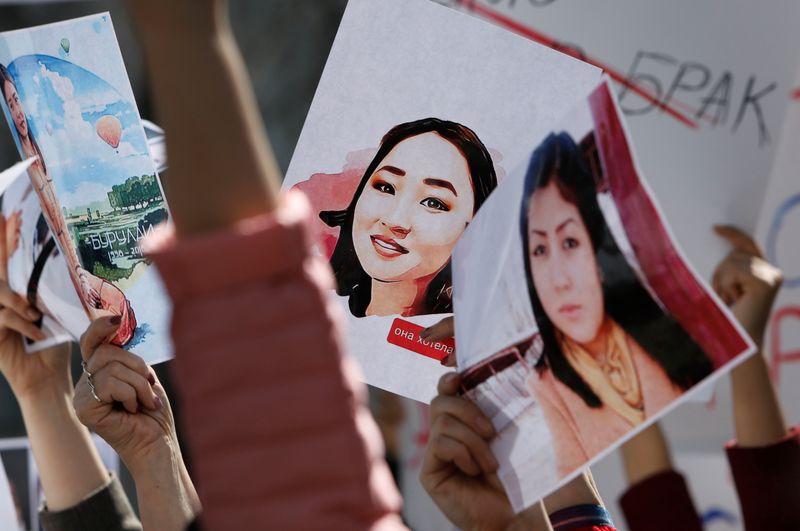 © Reuters. People attend a rally in front of Kyrgyzstan’s interior ministry in Bishkek

BISHKEK (Reuters) – Hundreds of people rallied in front of Kyrgyzstan’s interior ministry on Thursday to demand the resignation of its leadership for what they called police inaction over the murder of a kidnapped woman.

Aizada Kanatbekova, 27, was kidnapped on April 5 and found strangled in a car in a rural area two days later, together with her suspected murderer who had died from knife wounds, apparently self-inflicted.

His suspected accomplice has been detained.

The fact that police had failed to find the suspect even though the kidnapping had been caught on camera with the car model and number plates clearly visible has prompted public outrage and calls for senior officials’ resignation.

About 500 people rallied in front of the ministry headquarters in capital Bishkek on Thursday, shouting “Shame!”.

Prime Minister Ulugbek Sharipov addressed the crowd, asking the people to give police time to investigate the crime.

President Sadyr Japarov said in a statement the culprits would be punished. He also condemned the practice of bride kidnapping, which remains widespread in the former Soviet republic despite official pledges to crack down on it.

The practice involves a potential groom forcibly taking a young woman or girl back to his home before pressuring her to agree to marriage by writing a letter of consent. Kyrgyzstan outlawed it in 2013 after authorities recognised it could lead to marital rape, domestic violence, and psychological trauma.

Australian women are building a different kind of ‘she shed’